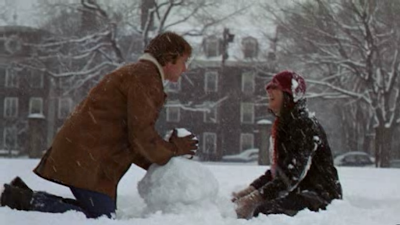 One time I was helping a fellow student go over the scene-by-scene summary of his screenplay (called a “beatsheet”). It was a family drama, with lots of arguments back and forth. Just scanning down the list, I said, “Well, first of all, you need to cut out beat #8.” Beat #8 was “Everybody apologizes.” In our real families and relationships we apologize all the time. That’s why nothing really exciting happens to us. We defuse emotional situations before they get too big. In real life, love means that you always have to say you’re sorry. If we want to experience big cathartic emotions, we do it vicariously at the movies, where we see what would have happened if we hadn’t apologized.

In movies, people never get to apologize. Not until the very end, anyway. That doesn’t mean that everybody has to be a jerk. You can have a bunch of well-intentioned characters, but the fickle finger of fate intervenes to stop them from saying the right thing to each other. Imagine a beatsheet that looks like this:

You don’t have to cut out beat #2 entirely, but what happens when you let beat #3 step on (and squash) beat #2?

Never let up. In movies, things have to go from bad to worse, even if nobody wants them to. It’s not like real life. Nobody gets to apologize. If they want to apologize, interrupt them. Whenever anyone is about to release tension, interrupt them. Is the couple on the date about to kiss? Interrupt them. About to have sex? Pull them apart. You might think that the audience will love you if you give them what they want. Not true. Make them want it and then yank it away.

What’s the real reason for all this coitus interruptus? Why not let your characters act like normal people and give the audience the release they’re looking for? Because if you gave it to them easy, then they wouldn’t want it. Audiences are like everybody else: they only want what they can’t have. This is the secret of foreshadowing. You tease the audience with details about the future, which makes them feel cheated, which makes them demand to know what you’re not telling them. But if you hadn’t teased them, they wouldn’t care in the first place.

This is great advice.

It's great advice because apologies are, at root, attempts to return to the status quo. And stories are about leaving the status quo behind. (I think this was inherent in your example, but it crystallized for me with the example, so I figured I'd share in case it helps anyone else.)

I know this is a very old post... But arguably one of the best and most iconic scenes in the wonderful Avatar: The Last Airbender, is Zuko's apology.

Does it work because Iroh cuts his apology short? But then he says he forgives him, so it's a full apology. I can see how it's important in Zuko's arc. Not only he's admitting he's wrong, he's allowing himself to be vulnerable (something that many characters who project a tough persona struggle with). But it's an apology scene.