The Hero Project #22: The Wrong Person to Pick On 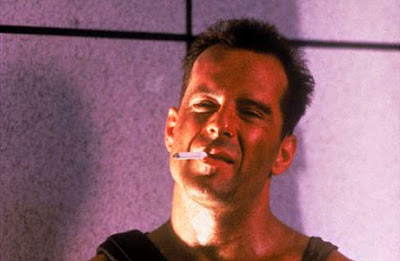 I pick my heroes a lot more carefully than I used to. I now sit down before I start writing and I go through my checklist. I give them a brief chance to stand proud before I start pushing them around. But, as I explained before, their strength leaches away as I write. When they won’t do what I want them to do, I respond by simplifying their motiviation. The easiest way to do that is to make them less proactive and more reactive. And whenever the script hits a dead spot, I amp up the conflict by giving the villain a bigger advantage over the hero. It’s hard to make the villain stronger (they still have to be defeated, after all) so I make the hero weaker. By the end of the first draft, I’m left with a limp noodle for a main character.

Here’s the problem: I never really wanted to make people cheer. Just the opposite: I always want to send a shiver of dread up a reader's spine, or to make them blush with furious indignation at unfair treatment, or to yank the carpet from under their feet with a shocking reversal of fortune. Whether I’m writing a bio-pic or a thriller or a comedy, I love to put my hero and my audience through the wringer.

Making an audience feel is great, but it becomes a problem when all they feel is pity. Nobody ever said: “I just saw a great movie, the hero was totally pitiful! I hope he comes back for a sequel!” The audience wants to invest emotion in a hero, and they only invest if they can expect a satisfying pay-off. To get that investment, you have to write about the person they would pick to be the hero, the person that they would choose to root for.

Take Die Hard. A building full of bankers is taken hostage by a terrorist (Hans), but there’s one off-duty cop in the building (John) who has just happens to be there to reconcile with his ex-wife (Holly). Who should we choose for our hero? John doesn’t actually have the maximum amount of conflict, does he? He’s having a bad day, sure, but the bankers are all having a worse day-- They’ve never even fired a gun before! If the goal was to pick a hero with the maximum amount of conflict, why not force one of them to save the day? What if John hadn’t been there visiting Holly that day? What if she had brought her kids to the party instead, and now she was the one person who was free to act? That’s a pretty exciting movie! A forty-something mom in a business suit has to crawl around in airducts and rescue her kids? Maximum conflict! Huge motivation! Lots of dread! Lots of tension!

But in that case, more conflict would have meant less excitement. Here’s the problem: if Bonnie, with no training and no experience, could take out Hans, then we would suspect that anybody could take out Hans. Ironically, we would feel less tension, not more, with every moment she remained free, because this whole plan would start to seem half-baked. After all, Hans knew that the building would be full of bankers. At the very least, his plan should be banker-proof!

The writers didn’t start out by asking “how do we maximize conflict for our hero?” They asked “How do we maximize conflict for our villain?” Hans drives the movie, and the audience secretly loves him, and he has a great plan. But then a terrible thing happens to him. Something he never could have prepared for: our hero. This was another a-ha moment: The hero needs to be the wrong person to pick on. Let’s pick up there tomorrow.
Posted by Matt Bird at 11:06 PM

Ooh, yes. I like the heroines who get pushed and pushed and then state, "I am So-and-So, and I HAVE HAD ENOUGH! And then they kick butt.

That always works for me. :)

Hey Matt, have you ever taken one of those Myers-Briggs Jungian personality tests? I'm guessing you're an ISTJ

hello!This was a really magnificentsuper blog!
I come from milan, I was fortunate to come cross your theme in bing
Also I obtain much in your topic really thanks very much i will come every day

Imho the misconception is to "maximize" and the difference between challenge and conflict.
Instead try to create an equilibrium of forces (the sum of strengths, weaknesses, skills) just like Batman needs the Joker.

The Rookie has to gain self-esteem, may be the Pro at Work has to overcome a trauma... the villain might underestimate the hero first or try to corrupt him but essentially the forces should be almost equal at an increasing level.
Nobody wants Batman to catch a thief in the showdown, nobody wants Ripley to find some ulimate anti-alien-Bang-and-dead-weapon and the showdown of War of the Worlds was a mess.