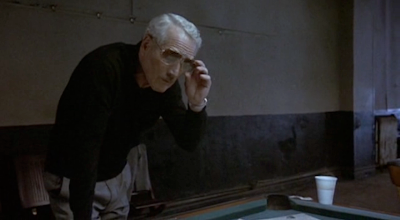 The veteran indie producer Ted Hope runs a great blog called Truly Free Film which has good advice for the harsh business of independent filmmaking. Ted once ran Good Machine with James Schamus, and he recently reprinted their house list of No-Budget Commandments.

All of these are good ideas, even you’re not going the indie route. I want to focus on one that you don’t hear that often, which is hidden as the second half of number four: “Invest meaning in everyday commonplace things – make an orange a totemic object John Ford would be proud of.” I’ve only recently become of how important this is. In my entry on Tension I noticed how each character had a totemic object that they were associated with, and now I see it everywhere.

You can’t rely on character interactions to reveal all the emotions you need to reveal. When actors talk with each other, they have three different factors influencing their performance:

But when you establish their relationship to an object, they can express their true emotions, unfiltered by other baggage.

I just rewatched The Color of Money, which has aged beautifully, especially the streetwise script by Richard Price. Paul Newman, earning his only competitive Oscar, reprises the role of Fast Eddie Felson, 25 years after the events of The Hustler. Newman schools a naïve young pool phenomenon played by Tom Cruise (turning in a brilliant performance of his own). Together with Cruise’s shady girlfriend (Mary Elizabeth Mastrantonio) they tool around the Northeast, hustling in dingy joints, on their way to a big tournament in Atlantic City. 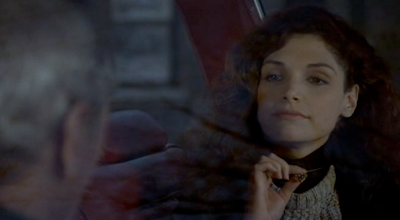 Each character has their own totem object. First Newman gives Cruise a fancy pool cue, on the condition that he never use it, because that would ruin the hustle. It becomes the object of all Cruise’s frustrations as he tries to learn the business. Mastrantonio wears a necklace that she stole from Cruise’s mother. She chuckles as she explains to Newman: “He says his mom had one just like it”. As they compete to see who will get to exploit Cruise’s talent, Newman keeps an eye on the necklace to remind himself who he’s dealing with. Newman doesn’t get his object until the end of the second act: it’s the special weapon he finds in the cave. Newman finally admits that he needs prescription glasses, and uses them to compete with his former protégé. Count how many glances and comments each one of these objects earns, and how they change meaning over the course of the movie—when they get taken out, or put away, or change hands. The characters can’t say what they feel, but their interaction with these objects reveals all.

As Ted Hope points out, this is the sort of thing that creates easy value for a movie. Too many independent films can be summed up as “people stand around in rooms and talk,” but the world of a movie starts comes alive when the audience knows that certain objects are fraught with meaning for certain characters.

Fascinating! I saw 'The Color Of Money' many years ago, but the presence of the totem objects was lost on me. Now I want to run out and rent it, just so I can watch the silent subtext of the objects. Thanks for opening my eyes a little wider!