Welcome to week two of the Hero Project! I’ll get back to underrated movies and other stuff eventually, but let’s spend a little while digging deeper into this rabbit hole... 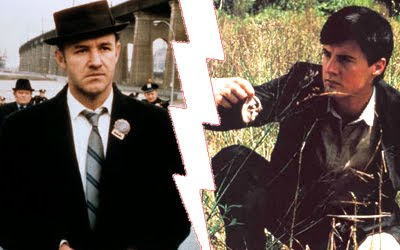 So at the end of last week, I had concluded that I had spent too many years trying to fit all heroes into one model, as if they were going on the same journey. I needed multiple models for multiple journeys. But what are the different types of heroes? I knew that it had something to do with skills, so I decided that the three most important questions to ask were these:

I made this handy chart, and gave a name to each type. But, as you’ll see, I ended up with a pretty useless category (No. 7), and then I decided that I had to break the last category up into two. These are the heroes who have nothing: no qualifications, they aren’t on the job, and they aren’t in their element. But, as I realized last week, some heroes in that situation find that they can adapt the skill from another job to succeed in their new environment, while some just have to muddle by, so I split those off:

What do you think? Are any of these in the wrong category? Feel free to disagree. For that matter, are these categories useful? I don’t want to imply that some of these types are more legitimate than others. Quite to the contrary, now that everybody has their place, I see that each can work, even category 9, which I spent so much time maligning last week. I’ll discuss some of the categories in more detail this week, but first I need to determine if they actually cover every type of hero. I can think of two types that mess things up a little, so that’s tomorrow...

For "the Heckler," I'm also thinking Jay and Silent Bob. It seems there are some more examples dancing on the edge of my mind, but I can't quite pin them down.

Actually, maybe this would describe a number of the classic Looney Toons characters? Also Smiley Bone? Seems most well suited to cartoon characters.

I don't know, Bugs Bunny is pretty much qualified for anything. Smiley Bone (from the comic book series "Bone") is a good example. As for Jay and Silent Bob, I only saw Clerks, where they were in their element, so I couldn't say.

Bugs seemed arguable, but I guess I was thinking Daffy Duck and Pepe Le Pew more specifically. It seems a category made for supporting characters and cartoons, rarely for feature length leading roles.

Oh, I guess Kramer from Seinfeld would also fit neatly into this category.

I came over here from Fuse - your list reminded me of this:

Out of curiosity, what precisely do you mean by "On the Job"?

Do you mean that they're legally authorized (an on-duty police officer, a licensed doctor)? Or that they're getting paid to do whatever they're doing, regardless of how the authorities feel (a hired PI)? Or just that they have somehow taken responsibility for helping (superheroes, the cop ordered to let it rest, the victim's friends and relatives)?

If it's the first two, then most of the companions in Doctor Who would qualify as The Heckler, and probably a number of superheroes. Probably Harry Potter - untrained for most of the series, and his technical "job" is student, but he takes to the magical world and fighting Dark Lords like a duck to water.

Could it be the problem is that you've sorted a lot of characters who would fit into that role into "adapter" instead? I'd say like isn't qualified, isn't on the job, but is in his element as an adventurer. That's why he's able to adapt so quickly. Most classic heroes (the peasant boy farmer type) fall into this category. Otherwise they would fall into the last category where this is their personal hell because they are failing to adapt. Hecklers would be a better title for that last category. And characters like Jay and Silent Bob would definitely fall into that category, as would a lot of comedy characters like Mr. Bean for instance.