How town! Summer in the city! The back of my neck is feeling dirty and gritty! It's time we indulged in some seriously silly action movies! Welcome to Cheesy Movies Week! Fair warning: I will be heaping praise on some widely-despised examples of cinema.


The Story: Two armored car guards try to clear the money out of the banks along a river before it floods, but a well-armed heist gang shows up to take advantage of the situation. One guard gets away with the money and the gang chases him through a rapidly-flooding town.

How it Came to be Underrated: Graham Yost sold three high-profile big action spec scripts for big money in rapid succession: First Speed, then Broken Arrow, then this. The other two earned back their big pricetags, but this one turned out to be one high-concept heist too many for audiences. Slater is underwhelming as always, but this is nevertheless an endlessly entertaining cheeseball heist/disaster flick that is criminally underseen.

If You Like This, You Should Also Check Out: Yost has had a very smart career: after making his name by selling a bunch of cheesy action spec scripts, he used that clout to change course and start creating critically-acclaimed TV shows like “Band of Brothers” and “Justified”. Good for him! That’s the dream of every cheesy-thriller writer.

How Available Is It?: The DVD is bare-bones, but I don’t think that the Criterion Collection is going to get around to this one anytime soon.

Today’s Post Was Brought To You By: Uncanny Tales! 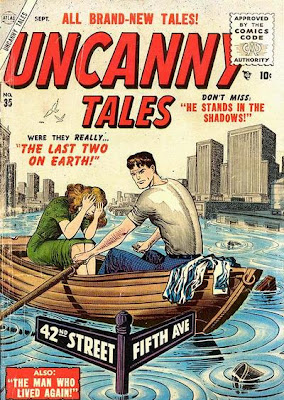 Oooo, I may have a candidate for this category; it matches your criteria on a number of levels. Are you familiar with "The Hidden"? (Ignore its sequel.) This is the movie most likely to cause whiplash double-takes from people who know me, when I recommend it, but my affection for it has survived over several decades and a number of viewings.

Never saw it. But Kyle MacLachlan always makes interesting choices. I should check it out.

Geoff said...
This comment has been removed by a blog administrator.
8:33 PM

Whoops, Geoff knows me too well and he guessed what was coming later in the week. I had to delete his comment to keep up the suspense!

I also endorse The Hidden.