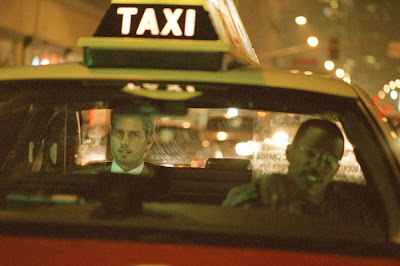 I’ve been writing a lot of thriller treatments for production companies recently. The more I write, the more I worry that the genre just doesn’t make any damn sense. Movies about cops or private detectives who get mixed up with murderers are logical enough, but those sub-genres are considered box office poison these days. What production companies want are Hitchcockian thrillers, about normal people who get thrust into deadly situations with another human being.

But it’s almost impossible to get these stories to make sense. Like any good writer, you try to start with three-dimensional, realistic, organic characters. Then you have to make those characters try to kill each other. But the more realistic they are, the less likely they are to do that.

It makes more sense, of course, if only one of them actually tries to kill the other, and the other one runs and hides, but that breaks the rules of the genre. They have to fight back. In Strangers on a Train, It’s not enough to have a crazed killer like Bruno go after a nice guy like Guy. If Guy runs and hides and calls the police, like any reasonable human would do, then you have no movie. Like any good movie hero, Guy has solve his own problems, which means stopping Bruno himself. Which is crazy. Has there ever been a real case, even once, in the history of the United States, that a serial killer targeted someone and that person responded by killing the serial killer himself? Ever? Well guess what? In thrillers, it happens all the time.

Getting your villain to try to kill somebody is hard enough. Still, we all know that psychos occasionally kill people, so at least it’s not outside the realm of possibility. The problem comes when you try to get the hero to respond in kind. Granted, they have a much better reason, the villain tried to kill them first, after all. But still, killing is so extreme. And it’s a dumb idea. If the cops find a bunch of dead bodies, and you’re there with a smoking gun in your hand, they’re not going to want to hear that one guy killed all the rest and so you killed him in self-defense. That leaves the DA with no one to prosecute. They don’t like that. Their incentive will be to disbelieve your story. Then they get to hang all the bodies on you.

In Collateral, Jamie Foxx, a black cab driver, kills Tom Cruise, a white man in nice suit, but wait, he’s got a perfectly good explanation... Good luck with that. A dead white guy in a suit is always going to look pretty angelic to the police. But if he’s a cackling psychopath and you manage to keep him alive, then maybe he’s going to start saying evil stuff and hang himself. Whatever you do, don’t kill him!

Hey Matt, what's your e-mail address? Would like to ask you something...
Respond to: cooproberts@gmail.com

I don't know, Matt. Isn't it your job to make your thrillers make sense? The best ones have a plausible moment-to-moment logic for why the hero doesn't just go to the cops. If the best works of the genre still seem too nutty to you, what are you doing writing thrillers?

Good question. It's wearying, but yeah, you're right, it's my job. The thing is, when I do my job well, nobody notices. Now, when I watch thrillers, I'm very aware of how every story beat is an excuse for the heroes to not call the police, though that's never the point of the movie. The screenwriter spends all of his or her time worrying about a problem that the audience is never going to be aware of.

But I suspect that if I were writing romantic comedies, I would become acutely aware of all the plot contrivances that make that genre possible.