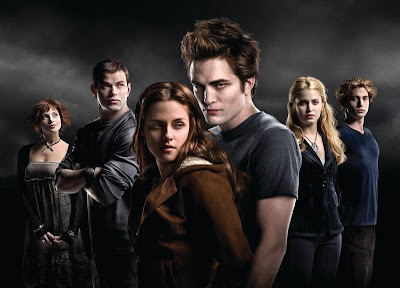 Here’s a follow-up to yesterday’s rule about throwing away the map. I finally got around to seeing the first Twilight movie, which made for a baffling and dispiriting evening. Obviously, I knew it was teen-targeted melodrama, so I expected to find the tone a little overwrought, but, given the popularity of it all, I assumed that at least the plotting would be pretty solid. Hoo boy, it wasn’t.

A girl falls in love with a vampire. He lives in a house full of incestuous vampires but he tells her she can trust them because they’re all vegetarians. Sure, someone keeps sucking the blood out of the local townspeople, but it’s not them, he promises. The girl shuns her loved ones and puts all her trust in this new family... …so I keep waiting for the scene where the cult she’s joined turns out to be evil, right? It doesn’t happen. It turns out that she’s joined a good cult. The bloodsuckers turn out be a few bad apples who got shunned from their shiny happy family.

Going into the second half, things get even more backwards. The three bad apples decide that they want to steal the girl from the seven good guys. One of our heroes does the math and announces: “Well this won’t be so hard, there are seven of us and three of them.” Now, usually in a story, this would be the cue for the good guys to start getting killed off one by one until it’s down to just our young lovers against the three killers.

But once again, my expectations were confounded. Instead, the odds shift in favor of the good guys. One of the three bad apples shows up on their doorstep because he feels bad about all the fighting, and he wants to make amends by telling the good guys everything they need to know! Then one of the last two bad guys decides to go on vacation for some reason. The odds are now 7-1, good over evil. Guess what happens when the one remaining bad guy attacks our heroine? The seven good vampires immediately pounce and tear him limb from limb. End of movie. (Except for twenty minutes of prom.)

This brings us to a variation of “Tear Up The Map,” which is “Any Place That Appears To Be Safe in the First Half, Should No Longer Be Safe In The Second Half.”

Does it help that the one reformed bad guy tries to eat her in the second book?

I guess I see your point, that, in order for there to be conflict, the "good" side should turn out to be evil. My problem with that is that we've come to expect that. Most stories turn out that way, so there shouldn't be any problem with trying to shift the dynamic or the expectations. Even you admit to being caught off-guard -- though the movie is a waste of time, at least it tried something new in its' storytelling.

Meh...the movie is better than the book in one major respect: it doesn't wander incessantly. It at least has a structure, flawed or otherwise.

The book generally gets D- ratings for every category of writing except the only one that matters: creating a powerful emotional experience in the reader which manages an astounding A+++ for the target market which is teen girls.

Oh, and technically, since Bella starts out with something of a death wish then siding with the Cullens actually works in terms of her character development, ludicrous or not. It doesn't hurt that her pre-existing desire to die and her new desire to get the guy happen to be one and the same. So the general rule to read the book before watching the movie is really important in this story IMO.

Unknown said...
This comment has been removed by the author.
4:00 AM