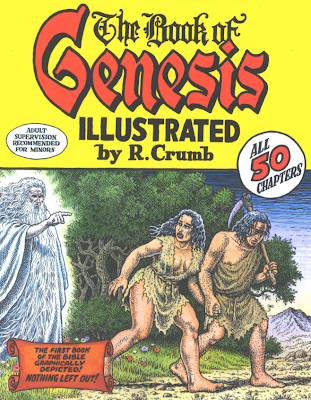 Far and away my favorite comic of last year was The Book of Genesis Illustrated by Robert Crumb. Anyone who has seen the great documentary Crumb knows the nightmarish power of Crumb’s cartooning. Now, after a lifetime as an angry, obscene iconoclast, Crumb has turned all his powers towards a faithful rendering of the ultimate “establishment” document. It turns out to be his masterpiece. Only someone with Crumb’s irreverance could interpret the founding document of his own religion with such clear-eyed and open-hearted vigor.

I gave up on picking a favorite moment, so let me show four. When I heard that Crumb was doing the full text, my first question was “But will he really do all the begats?” Yup, he does, albeit clumped together. How he chooses to illustrate it is a good example of the sociological eye he brings to the project: 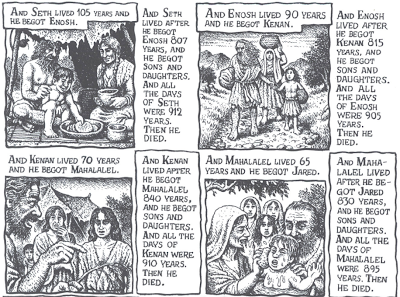 A witness in a modern police line-up would describe every man in this book the same way: “It was a hairy hasidic guy in a robe, officer.” This is the ultimate artist challenge. How do you differentiate between dozens of characters who all look superficially the same? This is where Crumb’s ability to draw every line of character on a person’s face comes in handy: 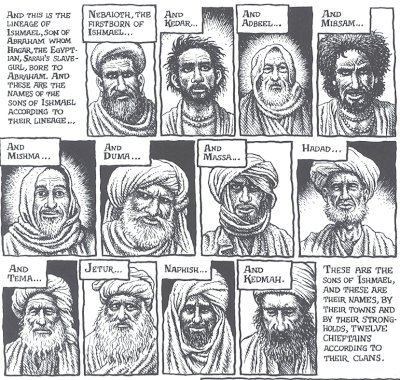 Of course, because it’s Crumb, he doesn’t shy away from the more disturbing aspects of the text, which he doesn’t have to dig hard to find. You expect him to editorialize about these things, and he does, but in surprisingly compassionate ways. I love the single tear that Crumb grants Sarah in this supremely creepy moment: 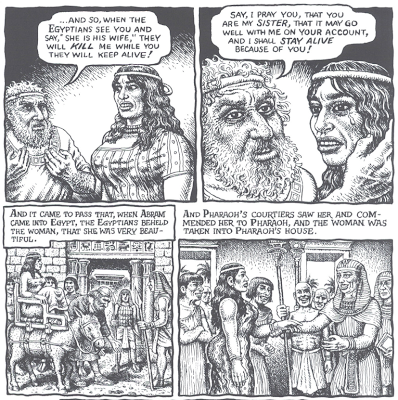 But he finds ways to enrich Abraham’s inner life as well. This is probably my favorite drawing in the book: 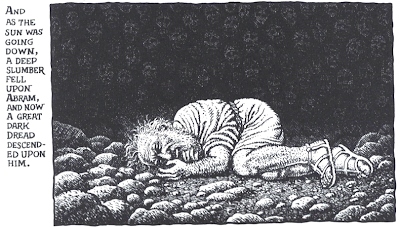 And the whole book would be worth buying for Crumb’s endnotes alone! I cannot recommend this book highly enough.
Posted by Matt Bird at 11:59 PM