Secrets of Dungeon-Mastering: Relics and Rarities 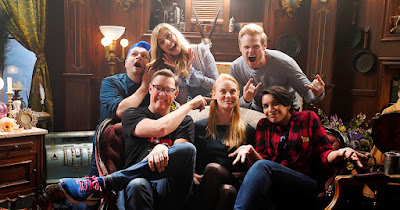 What is this? Deborah Ann Woll was on “True Blood” and played Karen Page on “Daredevil” and other Marvel shows, but she was always a closet geek and eventually got her own show as DM on Geek and Sundry. As with “HarmonQuest”, she invites on a celebrity guest to adventure with the regular cast every episode. These are horror stories set in the 20th Century, so you’d think they might play “Call of Cthulu,” but they’re playing DnD 5e.
The people involved:
What I learned about DM’ing from watching it:

The Power of Objects

Woll has something that other streams don’t have: props. She begins every game on a set where the PCs are encouraged to explore and find objects that will help them when they move on to the next room to actually play. She also dresses up in costumes to play the NPCs such as when she puts on a veil to play a mournful ghost. She also makes giant puzzles for the players to solve, which the players find delightful.

Enough with the Hanging Out:

You can play DnD without a lot of hanging out. One of my DnD advisors has been telling me that Critical Role totally changed DnD. Since that stream caught on, there’s a lot more of an expectation in home games that the characters will just hang out a lot and goof off in character. But some players, and DMs, would rather just play the damn game. Woll appeared on Brennan Lee Mulligan’s “Adventuring Academy” podcast and made it clear where she falls:
Give them multiple hooks to go on this adventure and let them choose their own

Different players play for different reasons and it’s great to have multiple reasons to go on each adventure. Here’s Woll on “Adventuring Academy” again:

What I especially love about Wohl's objects is that they are all story-telling driven magic items. They don't just give a bonus to hit, or cast a fireball, they do things like a mirror that allows you to look like someone who's reflection you've viewed in it. They add more creative problem solving to the game, just like the actual physical puzzles she presents her troupe with.

It's also great that she incorporates the puzzles into the narrative in often acceptable narrative ways. Most people think riddles and puzzles seem to not make sense, narratively, but hers usually do.

Sorry, Gillian here again from the comic books comment — I guess I’m going backwards. Anyway, I’m sorry for the pre-look-leaping/commenting — the above seems more relevant. (I’m trying to comment through my Google account, but I obviously have some problem bc it just reroutes me to “Comment as: Anonymous” etc. Ah, well.)