So here’s the story guys. I’ve decided to introduce my kids to Dungeons and Dragons, but it’s really hard. So I’ve decided to start watching some “actual plays” (TV shows or podcasts or YouTube channels where people play DnD or similar games) and figure out some of the rules to doing it well. And I figured I would share some lessons learned with you! 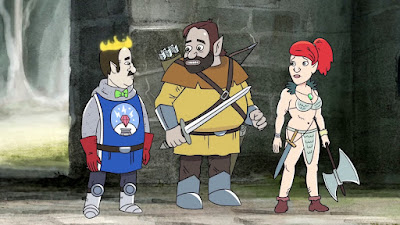 What is this? The folks who ran the podcast HarmonTown speculated that it would be fun to play DnD on air, then one of their listeners drove to L.A. to offer to DM for them. He turned out to be really great and it took off. Soon they turned it into a TV show on the short-lived streaming service Seeso. They are playing a DnD-like game called Pathfinder around a table and we are cutting between watching them and watching an animated cartoon of what they’re describing.

The people involved:
What I learned about DM’ing from watching it:

What do you do when your players’ commitment to roleplaying makes them less than optimal players?

This was a huge problem playing with my kids. They just wanted to goof around and not take things seriously, but the DM or module-writer has often created bad guys with enough hit points that they can only be defeated by playing optimally. If you’re not trying your hardest, your characters will die and then nobody will have any fun. In the pilot, the three player characters are at a celebration in an orc town when cultists attack outside the city walls. Our heroes go out to fight them.

Then Jeff announces that, since he’s a rogue, he wants to sneak up on the bad guys, which means that he’ll cover himself and mud and run all the way around the walls of the city to surprise attack them from the other side. Spencer gently reminds Jeff that they’ve entered combat so every turn now takes six seconds, so his miss a lot of turns by doing this. Jeff doesn’t care, he thinks it’s funny and in character and he wants to do it.

Spencer realizes he’s not going to win this one, laughs along and lets him do it. This means that everybody would now probably get killed, but Spencer simply has the town guard unexpectedly show up to help with the fight (and promptly get killed off one by one.) By the time Jeff is done running around the city (and Spencer definitely cheats how long that would take), the battle is balanced again.

Some tips for getting your players to laugh:
Posted by Matt Bird at 11:39 AM

Hi Matt. If you're looking to get your kids into D&D, I'm going to toot my own horn. I made a graphic novel RPG called Complete the Quest, the Poisonous Library (https://us.macmillan.com/books/9781250268303). It's a great intro for kids who want to learn about RPGs, to get them thinking about collaborative storytelling. A parent can read the book with a kid, and be a helpful guide/dungeon master, or let them read it on their own, depending on their age. The chapters help break it into digestible chunks before bedtime for younger kids.

Learning D&Ds rules and tips by watching actual plays is the way a lot of people learn. You can find a lot of different styles of play and learn from each of them, and how each table has its own feel. Heroic, hilarious, dark, romantic etc.

Some of my favourite things I've learned are:
Have multiple fail states. Rolling a 1 on a skill check to sneak past the guards doesn't mean they find you, it means they hear you, and are now on high alert. The chance to sneak past just got harder. And if they do find you after that, maybe you have a chance to bribe, persuade, or lie your way out of the situation. If you fail that, you have a chance to escape before you get to the prison. Or do a jailbreak with the other prisoners once there.

Also, know your players. Some people want the crunchy rules strategy optimization, some want to inhabit a character, some want to cause chaos and see what happens, some want to feel like they make a difference, etc. If you can find out what your players (and you) want, you can tailor the events in the game to what they like, giving each their moment. Maybe you have one character fighting a guard, while the other is trying to talk their way out of it with a different guard. One player gets to do a combat encounter while the other is doing a social one, and you can flip back and forth on their initiative. Like how a guard in Iron Man 3 just gives up and says "I don't even like these guys, they're creepy." You can describe the exiting action, and then the human reaction.

Hi McL, your book looks very cool! Having multiple fail states is a great idea, as is knowing your players. With my kids, I know they love lying games (One Night Werewolf, Chameleon) so I modded an adventure to give them more chances to lie.