Secrets of Dungeon-Mastering: The Adventure Zone 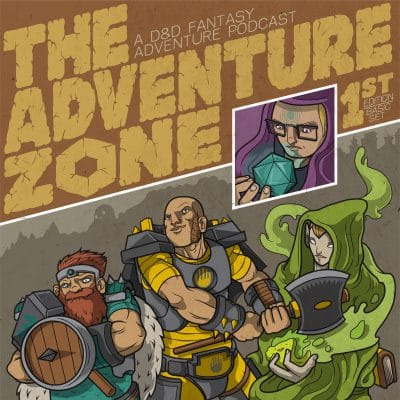 What is this? Griffin, Justin, and Travis McElroy had a freeform podcast that dated back to earliest days of podcasting called “My Brother, My Brother, and Me” Similar to HarmonQuest yesterday, they ran out of content and decided to play DnD for just one episode to kill time, inviting their father Clint along. It was an instant hit and they spun it off into its own episode called “The Adventure Zone”. DnD 5th Edition had just come out. It had a Starter Kit, but didn’t have a Player’s Handbook yet. This is the only actual play I listened to that’s using a pre-made module, “The Lost Mines of Phandelver”, from the Starter Kit.
The people involved:
What I learned about DM’ing from listening to it:

How to play with players who find DnD hard to take seriously.

One brother (I can’t tell their voices apart) talks about how, as a kid, he was a nerd, but he did like to say “At least I don’t play Dungeons and Dragons.” Both brothers who are playing bring a little of that attitude here.

Unlike the other shows/podcasts I checked out, these guys aren’t (yet) being paid to do this, aren’t hardcore gamers, and think they’re a little too cool for it, which I think is common. Griffin isn’t helping, because he’s sort of groaning at the names in the starter kit as he’s reading them.
Finally, he realizes he’s losing them and improvises a solution:
He adjusts his style on the fly until he’s taking the game just as seriously as his players. If they won’t accept serious DnD names, he’ll give them silly ones to see if that engages them more, and it works. Soon, they’re totally on board.

It's interesting that one of the ways that DM gets the group into the game, got me out of listening to TAZ. When the group doesn't participate in unusual D&D names, it's like when super hero comics don't have colourful costumed characters talking while chasing on rooftops or pummelling each other, and instead wearing black leather and sitting around talking to computer screens because it's more realistic. There was a period of several years in the floppy issue comic book world where that was the majority of super hero stories. (may your re-reads podcast live long enough to cover them) They were written by people (or catered to people) who were embarrassed by being adults into childish things and wanted to justify their hobby as much as possible. While fantasy names can go overboard with their alien-ness, some names that aren't "Douglas" are what give the world it's feel. But I wasn't their audience, so I get why they do it, but also why it's not for me.

TAZ is a really great way to learn about D&D. And it's a great story, too. At least the first arc, Balance. They've done a few others with varying levels of success. They're on their 4th full campaign now, though they did a few short ones after Balance.

Taako would be a great character to look at for Believe-Care-Invest, although it takes a little while for things to get rolling as Justin himself invests more in the character. By the end, the audience BCIs all three of the main characters (and a bunch of NPCs, too). I love Taako so much.

You should also check out "Not Another D&D Podcast" and the Dimension 20 campaigns. For D20, there's some free stuff out on YouTube and as a podcast (I recommend "The Unsleeping City") but there's a lot more behind a paywall on Dropout.tv, their super-duper nerdy and fun streaming service.

MyCaseStudyHelp.Com is an online assignment help and writing service provider for Graduate and Post Graduate students of universities. It provides quick solutions to the assignment, essay, dissertation and thesis related problems of students at an affordable service price on the following subjects: MBA, Nursing, Law, Engineering &c. Thousands of students availed our services and are happy and satisfied. Why are you lagging behind? Get more info at: https://www.mycasestudyhelp.com/assignment/

Looking for Assignment Help in Australia and Australian Cities (Sydney, Perth, Brisbane, Darwin and others)? Let our native academic writers help with you university assignment - guaranteed success. Visit us: Casestudyhelp.com.

Holmes Institute Assignment Help is now available at AssignmentTask.com at a very affordable cost. As the students of Holmes University are always indulged in assignment writing. Australian Assignment writers are providing 24/7 assistance to write assignments for Holmes institute. Just hire experts to complete your holmes college assignments, and they will do academic assessments on accounting, management, nursing, law, engineering or other courses as well. The holmes college students can take assignment help from the PhD and MBA experts of the field.

Thanks for sharing this post.
Do you need Best Assignment Help Perth at an affordable price? Assignmenthelpaus.com delivers 100% quality work with online assignment services. We have a team of PhD level Assignment Expert Writers. To know more visit us now.