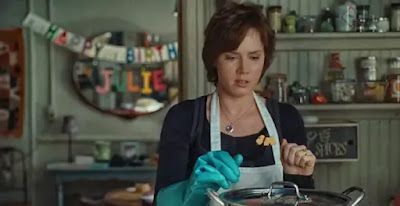 Obstacles are fine, but conflicts are better. An obstacle is anything that makes a task difficult to do. A conflict is anything that makes a hero not want to do it.
Amazingly, the Disney animation team had been writing and rewriting drafts of Frozen for two years before deciding to make the two girls sisters. Instantly, the story came alive, and they never looked back. Defeating a random snow witch is hard to do. Defeating your sister is hard to want to do. That’s the difference between an obstacle and a conflict.

Not all conflict is created equal. Genuine conflict occurs when characters don’t want to do something for reasons such as these:
This is a problem that plagues tons of lackluster stories: Cooking every meal in Julia Child’s cookbook is certainly hard to do, but it’s not hard to want to do, so who cares? That’s why the modern-day portions of Julie and Julia fall flat. For that matter, this was another problem with The Aviator. Making an expensive movie and deregulating air travel are both hard to do, but they’re not hard to want to do, so the movie never took off.

I won’t get into the strengths and flaws of the illustrated novel, let’s just look at Martin Scorsese’s movie Hugo.  Hugo is all obstacle and no conflict. Hugo encounters lots of obstacles: a train station guard he has to avoid, an old man who won’t give him what he wants, a living situation he has to hide... But he’s not reluctant to deal with any of them.

He does have a “want”, but it’s very vague: For some reason, he thinks that if he repairs an automaton, it will write out a message from his dad, but why does he think this? His dad told him outright that he just found the old automaton somewhere and he has no idea what it will say if they get it working. What part of that did Hugo not understand?

Not only does this make Hugo’s quest nonsensical, it makes his inability to spot other clues exasperating: every piece of evidence indicates that the automaton is the lost property of the man who runs the gadget shop, but it takes Hugo forever to accept that this might be true.

If I may slip into Meddler mode, the fix for Hugo seems fairly obvious to me: combine two flat characters, Hugo’s beloved dad and his rotten uncle (who both die mysterious deaths), into one complex character.

In this version, Hugo’s loving but ne’erdowell dad, who maintains the clocks in the railway station with his son, would discover the automaton and bring it home to Hugo, claiming he made it himself. When Hugo realizes what the gears used to do and asks what it writes, the dad quickly covers for his lie by saying that it’s a mystery he wants Hugo to solve.

Also, this way, Hugo’s surrendering of the automaton to the old man is a painful decision, and it requires him to admit the truth about his father. By recognizing and alleviating the old man’s bitterness, he gains insight into his father’s own failures, ironically fulfilling his original goal of understanding his father.

This change would not only strengthen Hugo’s motivation, it would turn external obstacles into internal conflicts. Hugo’s tasks would not only be hard to do, but hard to want to do.

Rulebook Casefile: Obstacle Vs. Conflict in The Hunger Games

Just as with Hugo, The Hunger Games is too much obstacle, not enough conflict. At least in this one, we did have two occasions where the heroine faces a genuine conflict and meets the challenge: At the very beginning, she offers to take her sister’s place in a gladiatorial contest (bold and heroic!). Then, at the very end, she tricks the gamemasters into letting both her and her pseudo-love-interest live (bold, heroic and clever!) But in between… not so much.

The co-competitor from Katniss’s home district (Peeta) decides that they should act like they’re in love, and she passively goes along with it. That’s a great story idea (borrowed from They Shoot Horses, Don’t They? but who’s counting?) but it doesn’t pay off. It’s neither an obstacle nor a conflict, because it’s not hard to do…
…or hard to want to do:
But the real problem is the combat itself, which is totally emotionally flat. She sort of wants to win, so we sort of want her to win, but neither she nor we have any strong feelings either way. There’s no emotional journey. As I complained about the book a long time ago, killing her fellow teenagers causes no emotional response at all, which is utterly bizarre.

And this brings us to the fatal flaw that kills the drama and exposes the theme as totally hypocritical… Where’s the Woody Strode scene? Spartacus thinks he can survive in the ring by not getting to know anybody he’ll have to kill. He only makes one friend, and ignores the rest. Then, on his first day’s fighting, what happens? He has to fight his one friend!

Katniss becomes the champion gladiator, but she never has to kill anybody she likes along the way. Everybody she kills is a jerk. This is totally morally and intellectually dishonest.

Jennifer Lee has been forthcoming about what a collaborative process writing this movie was.

Lee first became involved when she was co-writing Wreck-It Ralph and she was invited to screenings of the animatics for Frozen as it developed, just to give notes along with many others, and they liked her notes enough to hand the whole project over to her. One reason they needed a rewrite is that they had just decided on a big change. Lee was interviewed on the Scriptnotes podcast:
What they had discovered was the difference between obstacle and conflict. An obstacle is anything that’s hard to do, but a conflict is anything that’s hard to want to do. Defeating a snow queen is hard to do, defeating your sister is hard to want to do. That makes all the difference in getting your story to come alive.
Posted by Matt Bird at 10:30 AM