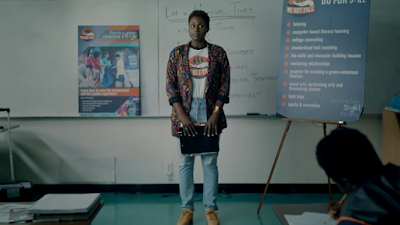 On her birthday, Issa gives a talk as youth liaison to a class of high schoolers, but the kids mock her. She then reports back to work at her non-profit, where she’s the only black employee. She goes to a birthday dinner with her best friend who tells her she’s been dumped. Issa admits she’s thinking of breaking up with her own boyfriend, but doesn’t admit she texting an ex.
Why Issa might be hard to identify with: Her white co-workers ask her what “on fleek” means and she responds, “I don’t know what that means.” Then, in voiceover, she tells us “I know what that shit means, but being aggressively passive is what I do best.” Passive aggressive heroes can get frustrating.

Believe:
Care
Invest
Strength / Flaw: Trying to do the right thing / Insecure about it
Posted by Matt Bird at 10:30 AM