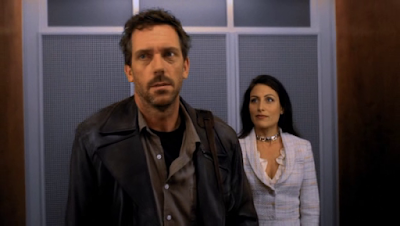 Okay, I know you’re tired of these, and believe me when I say that I’m tired of them, but the book’s still not done, so I did one last batch, and I figured I might as well share them. I do have future plans for good content for this blog, of various kinds.
It’s network TV so we begin, of course, with a cute young white woman in trouble. A teacher starts speaking nonsense to her classroom, then has a seizure. A few months later she ends up under the “care” of a misanthropic doctor named Gregory House, who refuses to actually talk to her. He meets with his team and they decide to run some tests, but his boss tells him he’s not allowed to run any further tests, because he hasn’t been doing his clinic hours.

Why House might be hard to identify with: He’s even more of an asshole than most TV asshole heroes. About his patient: “The one who can’t talk? I like that part.” He finds out it’s his friend’s cousin, but still responds, “Brain tumor, she’s gonna die. Boring.”