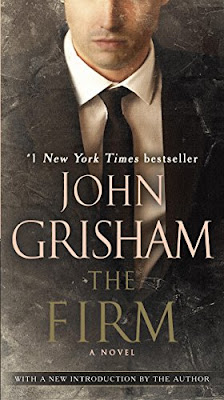 Mitch McDeere, graduating third at Harvard Law, interviews with a tax firm based out of Memphis. They make him an offer so generous he can’t refuse. He goes home and tells his wife they won’t be poor anymore.
Why Mitch might be hard to identify with: He has a passion for tax law! Not exactly getting innocent people off death row. Sounds terribly boring. He’s also easily seduced by money and doesn’t notice or care that the firm only hires white men.
Believe
Care
Invest
Strength / Flaw: Ambitious / Greedy
Posted by Matt Bird at 12:24 PM

I've never read The Firm, and maybe I'm just really not the target audience, but man, Mitch came off as a total asshole to me. Thinking of anything non-Harvard as a lesser school, responding to a slip of the tongue with an insult, dreaming of what color car he'd get... somehow all the Care stuff with his family and poverty just didn't do it for me. He didn't strike me as a poor boy hungry to earn a good wage, he seemed greedy and entitled.

Conversely, his apparent fondness for tax law made him more human to me, because he didn't seem to think he was slumming it by doing something boring and non-glamorous (whereas the stereotypical asshole lawyer character is a showboating trial lawyer).

As it stands I'd go through the rest of the novel thinking "this jerk deserves what he gets"... which is probably why I'm a writer and not a rich superlawyer.

Totally unrelated note, having two main characters named McDeere and McKnight seems like something an editor should have flagged.

I think one of the pleasures of the novel is that he does deserve what he gets. We enjoy seeing the greedy get punished. This to me is why the book was more appealing than the movie. In the book, he's still on the run from the mob at the end, but in the movie he very unconvincingly convinces the mob to leave him alone and gets to keep his great life.

@Nat 20...he is a lawyer after all...there is only so far an audience can get invested in him lol. I think that's why John Grisam had to give him such an over the top tragic back story. It's an out of the frying pan into the fire story at heart I think.