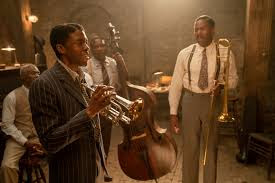 Spoilers! Definitely see this movie first.
Just in cast you weren’t sad enough about Chadwick Boseman’s death, here he is giving the sort of next-level performance that would have positioned him as one of our very best actors. Only now, after he’s gone, do we realize just how much we lost. I certainly hope he gets a posthumous Oscar, though it won’t do him any good.

Rulebook Casefile: Have a Cascade of Unintended Consequences

I haven’t talked about this for a long time.  I don’t think it’s in either book, but a great way to tell a story is to have a cascade of unintended consequences.  This movie is all about finding the meaning in a meaningless murder. As with another play-turned-movie, we see what happens to Levee’s dream deferred, sagging like a heavy load until it finally explodes. No one can directly blame the white people for what happens, but you can only limit a man’s opportunities for so long before he snaps, often lashing out in the wrong direction.
Posted by Matt Bird at 10:30 AM