Seeking Examples: Have them use language we only know from real life 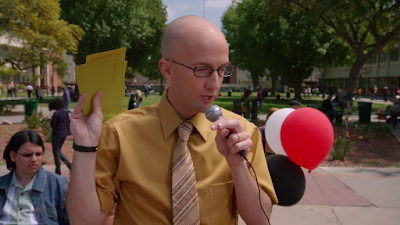 Okay, guys, that was a lot of BCI, wasn’t it? So the book is due in 12 days, which is punishingly soon. The good news for you guys is that this book will be mostly new to you, as I’ve mostly had to write it from scratch. Most of the book will be in the form of pieces of advice that I’ve hinted at on the blog but never given their own blog post, followed by examples drawn from some BCI’s you’ve seen and some you haven’t.
But I’ve got eight or so that I like, but only have one or two examples for, so I figured I would spend the next several days asking you guys for more examples of each. I crowdsourced more examples for my last book, and you guys were a great, help, so I figured I would tap into that again, if I could.  Thanks!

Let’s start with one from the Believe section: Have them use language we only know from real life

Dramatic writers can’t easily describe tastes or smells that the audience hasn’t experienced since childhood, the way prose writers can, but we can easily use language we haven’t heard in a million years, which will instantly make this feel like real life and not a made-up story.

In the first scene of the pilot of “Community”, the dean loses one of the cards he’s reading from, accidentally turning his rah-rah speech into a harsh put-down. When he realizes this, he gets embarrassed and asks everyone to help him look for the missing card, saying, “Can we all look around our immediate areas?” As surely as if I’d eaten Proust’s madeleine, I flashed back to hearing this phrase many times as a child, but I hadn’t heard it since.

Whenever you hear or recall a phrase from your youth that hasn’t been heard in a million stories, jot it down and cherish it. Look for ways to re-open doors in your reader’s mind.
Can you guys help me??  I know this happens in other places, and I’d like to include.  Worse comes to worst, I’ll just cut it, but I'd love to find some more examples.
Thanks so much!
Posted by Matt Bird at 10:30 AM

This may or may not help you Matt, but I just recently saw on cable TV the first half hour or so of "Best in Show", that comedy mockumentary about people and dog shows. Never before have I seen such rapid-fire examples of "Believe" dialogue and "Believe" behavior in my life. Seriously, one bit after the other! It's part of made the mockumentary comedic. You might check it out.

That would be a great movie to do. I'm pretty BCI'd out, but if my editor complains about not having enough examples, I've got a list of more books, movies, and TV shows to do.

Only thing my girlfriend and me could think of was "You remind me of your father" in Back to the future. Being compared to your parents by others happened to me a lot, even if it wasn`t even remotely true. I don`t know if that`s the kind of language you are looking for here though.
Btw my girlfriend urged me to thank you for all your work. Apparently i am talking a lot about the stuff from your book and podcast. Really helped me getting perspective on stories. Looking forward for the new book!
Greetings from Germany!

"Best In Show" -- yes! I just watched this the other day, and it has a great moment, in which the couple played by Eugene Levy and Catherine O'Hara are trying to check into the hotel, and their credit card is declined, and the hotel manager (Ed Begley Jr) is trying to accommodate them:

ED BEGLEY JR
Now, there's a little problem . . .Do you have another credit card I could run?

CATHERINE O'HARA
No. That's the good one. That should work.

EUGENE LEVY
Just give it a rub.

CATHERINE O'HARA
Check the strip. Sometimes the change or the keys . . .

ED BEGLEY JR
No, you see, it's coming up bad each time.

ED BEGLEY JR
Do you have another card?

CATHERINE O'HARA
No, that is the good card.

I have lived this truth.

(Meant to say this -- that's one of those moments that is both Believe and Care in one.)

I just want to say that I'm peeing my pants with anticipation over your next book. I've read a LOT of writing craft stuff and Secrets of Story (book, blog, podcast) is absolutely the single most useful resource I've found.

I've also been pondering this post all day, and I have many half-formed thoughts that I can't quite express, but the short version is that I'm not convinced this is a universal Believe technique, which may be why finding more examples is hard. I had the exact same reaction you did to that line in Community, but I wonder if it didn't have more to do with Community's specific style of comedy. For example, I have a hard time imagining this technique in a drama.

So glad you've found the advice helpful! I try to make it clearer in this book that nothing I'm asking for is universal. This one falls strictly into the category of "This is a fun trick to use", certainly not something everyone should do.

In Iron Man it starts with someone asking Tony "Is it cool if I take a picture with you?"

Black Panther has a twist on the classic with "Did he freeze?" "Like an antelope in headlights."

Guardians first lines have "Come on, Pete. Take these fool things off."

Thor shouts "another" and smashes a cup on the ground, which is something we would have seen in fantasy stories but never in real life, which works because of the real reaction to the unreal dialogue and action. An inverse of what you're suggesting to create otherworldliness which creates real worldliness as the other side of the coin.

Also, congratulations on finishing up your next book! That's an exciting achievement! I'm looking forward to reading it and sharing it with others.

I had a couple ideas about this one today. One: my son and I were watching Bluey (an Australian kids' show that's got to be one of the best-written children's shows ever) and the episode begins with Bluey lying on her dad in the yard, lost in thought. She goes, "Mum?" and her dad laughs and says "I'm not your mum, kiddo." Bluey giggles and says "Oh yeah! Dad?" That's a classic childhood occurence if I've ever heard one. (A related one would be calling your teacher mom, but I think that's become enough of a meme that it wouldn't feel true to a viewer anymore.)

My other thought was this wonderful exchange from the last episode of Firefly, in which the philosophical bounty hunter Jubal Early takes the crew captive:

I flipped out the first time I saw it, partially because the comedic timing is just terrific, but mostly because you never see people misunderstanding each other in movies and TV! Someone can deliver a ream of exposition filled with weird proper nouns and the other characters grasp it and recall it perfectly.

I never finished Firefly, but that's a great exchange! It does drive me crazy that people so rarely misunderstand each other in dialogue.