Seeking Examples: Give them rituals 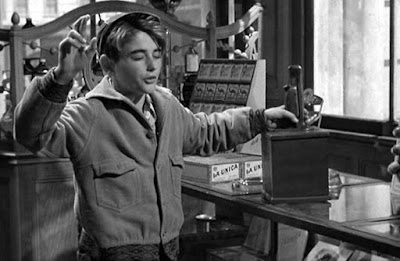 Okay guys, thank you so much for your suggestions yesterday! I think I’ve come up with a good one for that one, but feel free to offer more if they come to you.  In the meantime, here’s another:
Give them rituals

As we live our lives, we accumulate daily rituals, as surely as ships gather barnacles. We use them to soothe ourselves. Without realizing it, they come to define us.

American Hustle begins with the elaborate ritual by while Irving installs his toupee every morning. We linger on it for a full three minutes of screentime. The character thinks this hides his shameful secret from the world, but it actually defines him in the eyes of others, as we’ll see in the Care and Invest sections.

Young George Bailey in It’s a Wonderful Life has an odd little ritual: Every time he enters the drug store where he works, he stops off at the counter to use some sort of bizarre cigarette lighter contraption, which presumably fails a lot, so he says “I wish I had a million dollars”, and tries to light it. When it lights, he says: “Hot dog!” As you can tell from my confused explanation, the whole thing is unexplained and delightfully odd. It’s so clearly from real life.

Can you guys help me come up with at least one more example?
Posted by Matt Bird at 10:30 AM

The Big Lebowski is a movie of constant rituals - the Dude's White Russians, the rules of Shabbas that Walter adheres to even though hs is not Jewish, and the bowling rituals of the pederast. "O F.... it! Let's go bowling"

Before sleep every night, Aria Stark recites the names of the people she's going to kill.

Denzel Washington bringing his own tea to the café every night, in the equalizer.

In "Wallace & Gromit: the Curse of the Were-rabbit," their morning routine with the Rube Goldberg machine is a very funny and clever ritual.

The "Flubber" movie with Robin Williams has an opening with a similar vibe.

Ooh, Wallace and Grommet is good!

No Country for Old Men: the killer's coin flip ritual