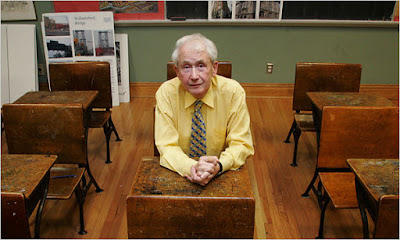 Malachy McCourt Sr. flees Northern Ireland with a price on his head, supposedly for work with the IRA, shows up in America, impregnates Angela Sheehan and has to marry her. Cut to three years later, Frank gets off a see saw quickly, which makes his brother fall off and cut his lip. Frank is sent home where he sees a dog has been run over in the street and died. His brother and dog’s blood looks the same, causing him to fear he’s killed his brother.
Why we might find Frank hard to identify with: He says in the third paragraph: “People everywhere brag and whimper about the woes of their early years, but nothing can compare with the Irish version: the poverty; the shiftless loquacious alcoholic father; the pious defeated mother moaning by the fire; pompous priests; bullying schoolmasters; the English and the terrible things they did to us for eight hundred long years.” So here he’s confronting the book’s big problem: His is a rather familiar story. The father is a typical Irish drunk father and the mother is a typical Irish long-suffering mother. He’s saying, look, if you want a surprising story, don’t read this. This will be a typical story, albeit especially wretched. The only reason to read this will because it is well-written. It helps a lot that it eventually won the Pulitzer Prize, but those who read it before then just had to do it on word of mouth.

Believe:
Care:
Invest:
Strength / Flaw: Scrappy / Fights over things he shouldn’t fight about
Posted by Matt Bird at 10:30 AM