31 Days of Believe Care Invest: The Wizard of Oz 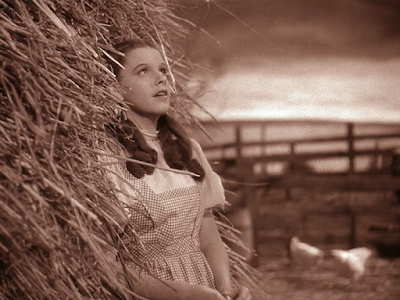 Young Dorothy comes home to her farm in Kansas to report that Miss Gulch wants to order her dog destroyed. Her Uncle Henry and Aunt Em won’t listen to her. Miss Gulch shows up with an order from the sheriff and takes Toto, but Toto runs away from her back to Dorothy, who decides to run away from home. On her journey, she meets a phony psychic named Professor Marvel who pretends to see that Auntie Em misses her. Dorothy heads home, but a tornado hits and she finds the house empty. The house flies up in the air and lands in the (color) land of Oz on top of an evil witch. The locals celebrate her and a good witch rewards her with magic slippers.
Why Dorothy might be hard to identify with: When she falls in the pigsty, her dress doesn’t get dirty, which makes her hard to believe in.

Believe
Care
Invest
Strength/flaw: Defiant / inconsiderate of the feelings of others
Posted by Matt Bird at 10:30 AM