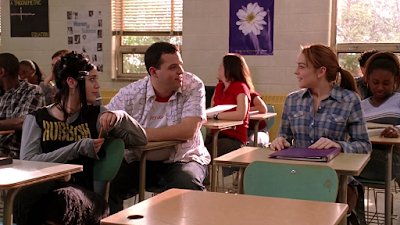 Hi, guys, so my book is due on March 1st, and I’ve decided I need a ton more examples. (I’m reading my previous book to my daughter and it turns out that I’ve already talked about Silence of the Lambs and Sideways a lot.) So I’m going do a bunch of checklist-free movies, and some books with just an Annotation and a BCI. And no more E’s. Here we go:
16 year old Kady Heron has been home-schooled in Africa and is only now going to an actual high school in America for the first time. She finds the experience humiliating. She eventually becomes friends with two “art freaks”, but also gets invited to sit with queen-bee girls called “the plastics”. The art freaks convince her to go undercover with the plastics are report back to them about how weird they are.

Why Kady Might Be Hard to Identify With: She says right away, “I know what you’re thinking, homeschool kids are freaks, or that we’re weirdly religious or something.”

Believe
Care
Invest
Strength/flaw: Booksmart / Not socialized
Posted by Matt Bird at 10:42 AM