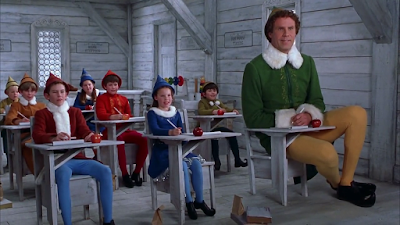 A baby escapes from his crib at his orphanage and climbs into Santa’s toy sack. He’s wearing Little Buddy brand diapers so they call him Buddy. An elf adopts him. 30 years later, he’s much bigger than the other elves, but doesn’t figure out he’s human until he overhears it. He finally learns about where he came from and sets off to New York to find his human father.
Why Buddy might be hard to identify with: He can be a little grating.

Believe:
Care:
Invest
Strength/Flaw: Exuberance / Inability to do what others ask of him.
Posted by Matt Bird at 10:30 AM