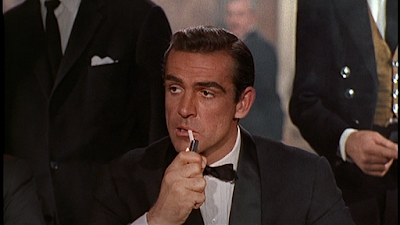 A government man named Strangways is killed and carted away in Jamaica, and the word goes out for James Bond, who is playing Chemin de Fer at his club. He flirts with a girl and asks her name. She says, “Trench, Sylvia Trench.” Mimicking her, he calls himself, “Bond, James Bond”, just as he lights his cigarette. They flirt and make a date for the next day, then Bond is called into the office. Bond’s boss M gives him the job to find Strangways. Bond returns home to find Sylvia in his apartment. He tells her he has to go but agrees to stay a bit longer.
Why Bond might be hard to identify with: At the casino, Bond is playing a game with no element of skill and winning through sheer luck, and indeed throughout the series he will be a pretty terrible spy that relies on luck a lot (You’re not supposed to tell everybody your real name!)