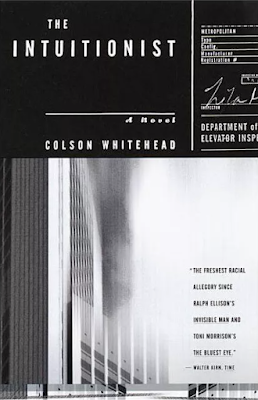 As I said yesterday, there were several elements of “The Intuitionist” that made it hard to identify with Lila Mae. So if I was alienated from my hero, why did I keep reading? Simply speaking, when the writing is this good, the author earns a lot of leeway. Ultimately, novel writing comes down to the basics: great words, great sentences, great paragraphs, and great chapters. Let’s look at some:

Whitehead uses adjectives that we can vividly see but we’ve never heard before.
Every one of Whitehead’s character descriptions are delightful.
Whitehead’s street description are great: “It is situated in the heart of the city, on a streetcorner that clots with busy, milling citizens during the day and empties completely at night except for prostitutes and lost encyclopedia salesmen.”
He does a great job job of breaking up sentence into shorter sentences in order to convey skepticism: “A regrettable incident in Atlanta kicked up a lot of fuss in the trades a few years back, but an inquiry later absolved Arbo of any wrongdoing. As they say.” Inserting that period takes the place of unneeded sentences, adjectives, and adverbs.

An aspiring novelist might find it worth their time to simply transcribe this novel and chew over every sentence to learn how to write.
Posted by Matt Bird at 12:00 PM