So Why Do David Remnick and Malcolm Gladwell Like Jack Reacher So Much? 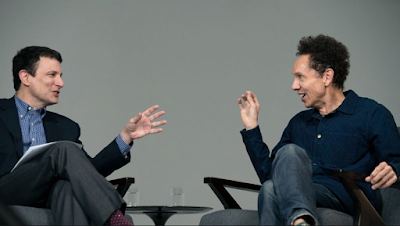 A lot of you have been holding your nose as I’ve stunk up the place these last two weeks with an examination of Lee Child’s first Jack Reacher novel, “Killing Floor”. And I myself have had quite of few criticisms of it. Of course, I could counter that by focusing on how wildly financially successful the books are, but these books don’t just appeal to the teeming masses.

David Remnick is one of America’s most elite literary minds. He’s been the editor of “The New Yorker” for 20 years, and he currently hosts “The New Yorker Radio Hour”. Their August 10th episode was about summer reads. This being the “New Yorker”, one of them of course recommends “Moby Dick”, but Remnick differs:


Later, Remnick calls Child “a great writer of thrillers.” And Remnick is not alone, his “New Yorker” colleague, and acclaimed author in his own rite, Malcolm Gladwell has written about “The Lawless Pleasures of Lee Child’s Jack Reacher Novels”.

How can they like these pulpy messes, hastily written without research, outlining or revision, filled with unintentionally comedic machismo? Well, mostly for the same reasons I do: Even these high-intellectuals appreciate Reacher’s inimitable voice. For his part Gladwell says:


He later concludes: “I’ve read all twenty of Lee Child’s novels. Maybe there’s something wrong with me. But I can’t wait for the twenty-first.”

But there’s another thing going on here, too. These books offer the pleasures of macho reading without a lot of the drawbacks.

Reacher’s most obvious literary antecedent is Mickey Spillaine’s Mike Hammer, who was both the last of the great hard-boiled dicks and the first of a new generation of bullet-spitting, commie-hating, over-the-top manly men who sold to a much broader paperback-reading audience. Spillaine was a better writer than Child, and he has his literary defenders, but he began a trend of alienating liberal readers that most macho writers have kept with. Child, however, breaks with it.

Don’t get me wrong, Reacher is explicitly anti-Democrat. In the first book’s third paragraph, Reacher tells us, “I was in a booth, at a window, reading somebody’s abandoned newspaper about the campaign for a president I didn’t vote for last time and wasn’t going to vote for this time.” He’s not naming any names, but given that the book was written in 1996, it’s not hard to figure out who he’s talking about. He goes on to complain about said president cutting the military budget, and those cuts turn out to have emboldened the bad guys and triggered their plan (Remember when Democrats would actually cut military budgets? That was a long time ago!)

But even old-school liberal Democrats like Remnick and Gladwell like and identify with Reacher, in a way they could never identify with a bundle of hate like Hammer.

One of Reacher’s most salient qualities is that, unlike most macho paperback heroes, he’s humane. He has interest in and empathy for the downtrodden. He is, after all, first and foremost, a homeless man (albeit by choice). Here he is riding to the police station after being falsely arrested:


When Remnick and Gladwell read these books at their beach houses, they’re not going to wince with embarrassment at Reacher’s politics or worldview. Reacher tucks payment and tip under his plate as he’s being arrested at a diner and he’s a gentleman with his love interest, whom he described in non-salacious ways.

Child, who is himself an anti-Thatcher guy, has created a hero that will appeal to everyone. He knows that his most hardcore audience will be truckers and other mostly-conservative men, but his work has reached millions more by combining Spillaine’s two-fisted red-meat appeal with his own BBC-bred humanism. He’s hit the sweet spot.
Posted by Matt Bird at 11:14 PM

"Spillane was a better writer than Child..."

It seems like there's always one fellow embraced by the literati at any given point as the token Good Thriller Writer: Raymond Chandler, Ian Fleming, Ross Macdonald, Elmore Leonard, Lee Child, etc. I think you've pretty much right on why. Even us nerdly book types have an inner teenage boy who yearns to be The Big Badass and/or The Noble Knight Errant, and it's a pleasure to be able to indulge said inner boy once in a while without constantly pulling back due to the usual garbage nonsense or abysmal writing.

The gendered language in my comment was not accidental.

Although she's not as prolific, is it possible the Good Thriller Writer for the literati right now is Gillian Flynn?

I also recoiled at the idea that Spillane was a better writer than Child (or even a good one). I did read all the Mike Hammer I could get my hands on as a teenager, but now I find Spillane's stuff pretty unreadable (I tried listening to one recently).

It seems very Reacher to see through Bill Clinton's sleaze, but I don't see him as a Republican, but as an unaffiliated, pragmatic independent. I suspect if he voted at all in 2008 it was for Obama!

I think Spillaine is a better plotter (certainly leaner!), and I find Hammer both more emotionally complex and more compelling than Reacher. It's hard to imagine a movie as good as "Kiss Me Deadly" being made from a bloated Reacher book. I've only read this one Reacher though.

Yes, but he doesn't reject Clinton because of his sleaze, he rejects him because of the fact that he cut the military budget.