Before We Begin: The First Two Selma Controversies 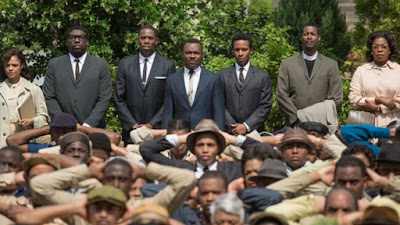 Selma is a great movie, and I’d love to just talk about why it’s great, but as I try to do so, I realize I must first spend a few days, with a sigh, discussing the many controversies that surround the movie, which will eventually turn into a discussion of storytelling choices, I promise. Today, let’s look at the first two of the three big controversies:

Controversy #1: Who Wrote It?

Onscreen, the screenplay for Selma is solely credited to Paul Webb, a white British man. But the movie’s director Ava DuVernay has said:


(she doesn’t say if she feels she should have gotten co-writing credit or solo credit).


So who should we believe? First we have to acknowledge that there is a long history of directors wanting re-write credit on movies, and writers crying foul, saying that actually originating the script is 99% of the work and the directors shouldn’t be allowed to take half the money for doing what they dismiss as a 1% rewrite. Normally, the Writer’s Guild of America then steps in, researches all drafts, and determines the onscreen credit (and thus the money), but directors often complain that the WGA (which is, after all, not the DGA) is biased against them in this process.

Jon Favreau says that, when he was a screenwriter, he swore that, if he became a director, he would never take the “A Film By [the director]” credit, because those are unfair to the writer, but then he entirely rewrote the movie Elf, or so he claims, and the WGA unfairly denied him a credit, so he happily took a “Film by” credit, as the only way to show that he did more than direct it.

In this case of Selma, we never got to find out what the WGA would have said because neither Webb nor DuVernay were guild members. Instead, Webb had a contract with the producers that said that he would retain sole writing credit unless he chose to share it. DuVernay asked him to share it and he refused.

On the one hand, as a screenwriter, I’m somewhat sympathetic to Webb. This is his first credited screenplay. He says that he wrote a draft of Spielberg’s Lincoln for which he got no credit (that screenplay is solely credited onscreen to Tony Kushner) and through that met Doris Kearns Goodwin whose husband worked for LBJ, leading him to this story. He researched and wrote the screenplay himself, then sent it out where it got “set up” with a number of different director over the years, including Michael Mann and Spike Lee, until finally DuVernay was attached. Why would he want to share credit, and half the money, after all that?

But his claims ultimately don’t stand up, because he’s trying to have it both ways. He tries to claim that she did not substantially rewrite the script, but he also tries to distance himself from the movie’s other controversies by claiming that his script was very different:


So which is it: Did she butcher his script or barely touch it? Basically, it seems like Webb, whose non-WGA contract gave him full control, took a very cynical position. He said, “I don’t like how much you changed my script, so for revenge I’ll deny you credit for making those changes!”

So, for the following pieces, I’ll refer to DuVernay as responsible for the movie’s final creative decisions, simply because Webb seems to agree with DuVernay on that.

In short, King’s litigious heirs ludicrously claim that King’s famous speeches should not be considered part of the public record, but rather their private property, and they’ve already licensed that property to (him again) Steven Spielberg, for a movie that Spielberg seems to be in no hurry to make. This is insane, and, as the Vox writer explains, the studio could and should have contested this bogus claim, but they chose not to because they’re too skittish, knowing that a judge could order all prints destroyed if they lose at any point.

So this puts the writer and/or writers in the unfortunate position of having to paraphrase the speeches, putting their own words in the mouth of this great speaker.  This brings up the question: Do they have any right to make a movie about a guy who is most famous for his speeches if you can’t use those speeches?

The answer is yes. Of course, one reason that the King heirs might want to stick with Spielberg over DuVernay is that they think he’s more likely to make a hagiography (or nothing at all), as opposed to DuVernay, who acknowledges King’s affairs. The Selma producers should have fought harder for the speeches, but, in lieu of that, they had every right and responsibility to go ahead. The King heirs can’t be allowed to use their bogus copyright claims to enforce a sanitized view of their family member.

And the paraphrased speeches, whoever wrote them, are fantastic. Nobody who didn’t have the original speeches memorized would have noticed that the words weren’t King’s.

But this has already gone on quite a while, so let’s leave the third and biggest controversy until tomorrow…
Posted by Matt Bird at 8:00 PM