Straying from the Party Line: Showing Some Compassion in “Beloved” 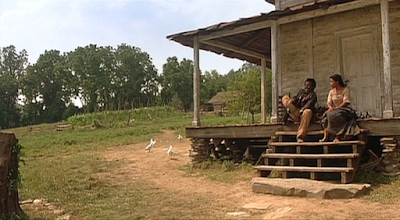 But there are exceptions. “Beloved” is a novel about characters who have endured an unfathomable amount of suffering. Sethe has a long story of whippings and rapes as a slave, all before she had to cut her own baby’s throat, only to have that baby’s ghost violently haunt her house and drive both her boys away. That’s a lot.

What sort of mind could even conceive of that much horror to inflict on one character? Is Morrison, like the last author we looked at, a sadist, torturing her character and the reader, preying on our masochism? No, she’s not. Morrison overflows with empathy and sympathy for her poor beleaguered characters.

This novel begins in a way that risks feeling too easy. Lonely Sethe comes home one day to discover a nearly perfect man simply waiting for her on her porch. A guy she always liked from back in the day who now just wants to love her, make love to her, and exorcise her ghost problem. True, he is later seduced by the ghost when she returns as a grown woman, but in the end he is happily reunited with Sethe.

You have to love your characters, and that means that you have to cut them a break sometimes. The reader is overwhelmed by the horrors of Sethe’s life, and we want her to have this happiness. Finding a great man so easily would be unsatisfying if this was just a romance, but there’s so much more going on here, and the ease of this romance is a nice counterpoint to everything else.

And of course, because these people are so damaged, there still is a certain amount of conflict. She begins by asking “Is that you?” and he responds, “What’s left,” which is a great beginning for a romance story. Soon we get:


Morrison is still making her heroine scratch for it, under all the layers of scar tissue. Both sides earnestly deflect the other’s compliments, feeling too traumatized to ever be desirablie. She’s giving her heroine a big-hearted gift, but nothing is easy for characters this scarred.

People enjoy reading “Beloved”. It was very popular on Oprah’s Book Club. It’s draining and painful, but also heart-swelling and powerful. Morrison isn’t saying, “The slaves had to suffer and therefore I will make you suffer.”  The text has horrors and rewards, as most stories should.
Posted by Matt Bird at 8:00 PM