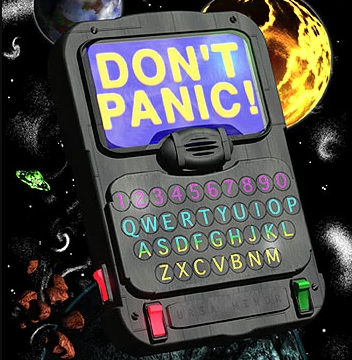 Nothing makes one feel older that rereading a science-fiction book from one’s youth only to find that it’s come true in the meantime.

I had previously read “The Hitchhiker’s Guide to the Galaxy” at age nine (I was precocious) back in 1984. At the time, the notion of an electronic book with a leather cover (my ipad today has a leather cover) was pretty strange, as was the notion of that device containing a nearly-infinite crowd-sourced encyclopedia that covered almost every conceivable topic, which was filled with errors, but nonetheless good enough to eclipse the popularity of traditional encyclopedias.

But it all came true. I’ve always said that Wikipedia is one of the most utopian aspects of our modern world, and this seems to confirm it.

And so I think to myself, “Boy, if I could go back in time and tell my younger self that this book would come true in his lifetime, wouldn’t he be surprised?” And then I realize, “No, he wouldn’t be.” If I were to go back and tell my 1984 self, “Hey, can you believe that the world is really different in 2018?” my 9-year old self would say, “Well I should fucking hope so—that’s the distant future! Do you live on the moon?” Then I would have to say, “Well no…In fact, we’ve abandoned manned space travel…But we all have computers in our pockets!”

(This is another area where Adams seems prescient. Indeed, one of the most dated aspects of the era in which it was written is that digital watches still seemed cool at the time. He correctly looked at that development and said “Um, we shouldn’t be so impressed by these. Better stuff is coming.”)

This book is far from hard science-fiction, but in creating the character of Ford Prefect, Adams wanted to show that he was cooler than anyone on Earth, so he invented something that made him cool: the guide. And now we’re all that cool. And that’s pretty neat.

In 1979, post-apocalyptic fiction was all the rage, and this book certainly fits into that category, but thankfully it turned out to be wrong about that, so far. You could say that the world is still tottering on the edge of apocalypse, but so far only the cool tech from this book has come to pass. At least I’d have a little good news to report to my 1984 self.

(I was going to illustrate this with a still from the movie, only to discover another thing the movie messed up: The book doesn’t have “Don’t Panic” on the cover!  This was the best I was able to find, though it hardly fits the description in the book.)
Posted by Matt Bird at 8:00 PM

It's hilarious that Douglas Adams' tossed-off jokes served as better predictions of the future than the sober prophecies of earnest futurists. When I was in high school, I remember the dystopian debate was framed as, "Which nightmare sci-fi future is going to come to pass--Orwell's, or Huxley's?" It turns out that both were wrong. Our world is a mixture of Philip K. Dick and Douglas Adams, which nobody would've predicted, because it would've been ridiculous. And yet here we are.