The Book that Breaks Every Rule, Part #3: Write What You Know 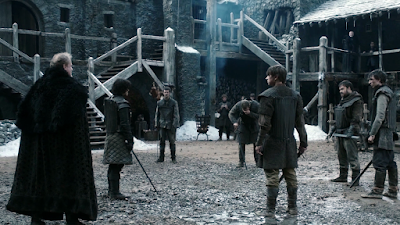 This is maybe the best known of all writing rules. Anyone who has merely dabbled in writing in high school has been told this by their teacher. But this book blows this rule out of the water. Let us examine the ways:


Does the Book Get Away With It? As to the first two bullet points, the answer is very much yes. How? Massive amounts of research. I’ve always said that you can write about anything if you’re ready to do years of research, and Martin’s understanding of medieval life could not be deeper or more convincing. As opposed to Tolkien, who was celebrating his own country and heritage, Martin is playing in a sandbox not his own, but he clearly loves it. Even the military, which Martin specifically rejected in his own life, is lovingly and precisely rendered.

(I should point out here that two of my own major projects were set in England, despite the fact that I am not English, nor even much of an Anglophile. I just found great true stories that happened to be set there and did a ton of research about those eras in that place. It can be done.)

But what about the third bullet point? Well you might recall that though this is one of the best-known writing rules, it’s not my rule. Rather, I’ve recommended that you don’t have to write the details of your life, but you do have to write the emotions you know. So is Martin doing that? Yes and no.

The original writing guru, Aristotle, said that all tragedies should be written about royalty, not because those are the only important people, but because they have farther to fall. Readers like stories that are big. If this book was about jockeying to be on the town council, it might have all the intrigue, but not the pathos.

So you could argue that Martin’s just following Aristotle’s rule, and by extension, mine: The book is emotionally convincing, so clearly Martin has found a way to tap into real emotions he knows well, then made them bigger by projecting them onto royalty.

But are there any downsides to a kid who grew up so working-class writing about the rich and powerful? The danger is that he might have resentment towards such characters that might show through. We’ll pick up there next time.
Posted by Matt Bird at 8:00 PM