Straying from the Party Line: The Unreliable Narrator Fake-Out in “Gone Girl” 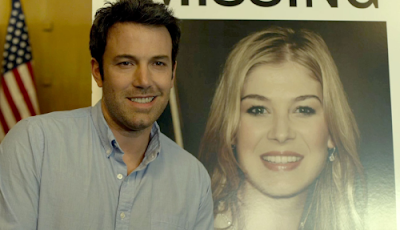 Another trend recently is the increase of unreliable narrators. In “Gone Girl”, Gillian Flynn takes advantage of this trend in a clever way: She plays with us by letting us assume that her narrator is more unreliable than he actually is. The fact that our narrator isn’t lying to us (much) turns out to be a big twist!

One of the most famous unreliable narrators of all time is to be found in Agatha Christie’s “The Murder of Roger Ackroyd”. At the beginning of that story, our narrator, Dr. Sheppard, tells us of the day of the murder, then about his experiences “assisting” Hercule Poirot is solving it. Only at the end, after Poirot has solved it, does Sheppard admit to the reader that he left out some key information: He committed the murder himself.

Flynn encourages us to treat her co-hero Nick as a modern-day Dr. Sheppard. We begin with the words “Nick Dunne, the Day of” then we get his first person tale of that day, but we instantly wonder if he’s just skipping over the part where he kills her.

Obviously, as an author, this is a very dangerous game. Usually, your whole job is to get us to fully bond with your hero, to share his POV, to know what he knows, to wonder about the same things he wonders about, to trust him to solve the challenge that we want him to solve.  Flynn is doing the opposite. She’s encouraging us to distrust our hero, to assume that he knows more than he’s saying. We suspect that he won’t really try to solve the mystery we want solved: What happened to his wife?

Flynn isn’t going to reveal until halfway through that Amy is still alive, so how does she fill our time with Nick while she’s encouraging us to suspect him? Amy has created a mystery for Nick to solve: a scavenger hunt. We suspect that he’s trying to solve it idly after killing her, rather than genuinely trying to solve it to look for clues to her disappearance, which is the truth.

By choosing to play this game, Flynn is limiting her own options. She can’t show us anything, or have him think anything, that would make it clear that he isn’t guilty. What a fiendish thing to do to herself! It’s amazing that she keeps it interesting. Cutting to Amy’s diary helps. We identify more with her than him, wondering along with her if he intends to (which is to say, already has) hurt her.

What about you? Did you suspect Nick? When did you stop suspecting him? Do you think the trick was worth the effort it obviously took for Flynn to pull it off?
Posted by Matt Bird at 8:00 PM

Simply want to say your work is outstanding. The clarity in your post is simply excellent and i can assume you’re an expert on this subject.. Thanks a million and please carry on the rewarding work and Thank you so much for caring about your content and your readers.

"...he’s having an affair. Ironically, it’s when he admits this to us that we really begin to suspect that’s all he’s lying about."

I was watching 'The Mist' (the Netflix series), and *SPOILERS* - it was abundantly clear that the main protag's shoulder-to-cry-on friend was the one who had actually assaulted her. I kept hoping there'd be some other credible reason given for his creepiness, not because I wanted to be proven wrong necessarily, but I at least wanted to feel like the writers were actually trying!

I should add that I'm usually pretty terrible at seeing 'twists' coming.

Great insights as ever, thanks Matt.

Thanks for news. Cool math games for kids and everyone. Enjoy brain training with math and logic games, math games. Cool math games run 3 fun : Use the up arrow to jump, the left arrow and the right arrow to control the direction. The speed and difficulty of this game will gradually increase.