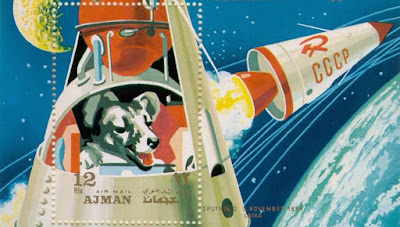 We’re finally going to post Podcast #4 soon, and I’m proud to say that it will be pretty-much entirely Laika-free. You’ll recall that, in the first podcast, I attempted to give away a story idea about Laika the Soviet Space Dog. Little did I suspect that my very own co-host would catch it, then come back in the second podcast with the news that he had written the idea himself as a 75 page screenplay. We then devoted our third episode to a dramatic reading and critique of that screenplay, and we’re now finally ready to move on…

…But wait! It turns out that James is not the only one to catch it! My brother listens to the show with his 10 year old daughter Alexa, and she, too, decided to try her hand at it, before episode #3 aired! I just recently got a copy and Alexa has consented to share it! If you tried out James’s epic take, then feel free to compare and contrast with this relatively brisk 6-page version.

If you’re up for one more take on Laika (and I could certainly understand why you wouldn’t be), check it out. I think it’s pretty great. She really captured the pathos of the opening, and she crafted a rousing finale.
Posted by Matt Bird at 5:48 PM

I just went on an internet spree trying to find your Twitter so I could tell you this: I have a whole bookshelf full of storytelling books reading about writing is my hobby), but your book is the first I would consider a must-read. Indeed, it's also a must re-read for me. Thanks!

Also, I didn't find your Twitter, obviously. There IS another Matt Bird who is a writer, though.

I'm so glad you liked the book!

From the moment Twitter appeared, I predicted it would create someone like Donald Trump, so no tweeting for me!

Donald Trump is a bit older that twitter, so you’re wrong about it creating him ;)

then, at that point Buy Essay Online committed our third episode to a sensational perusing and study of that screenplay.