How to Plot a Mystery, Part 1: Work Backwards from the Climax

So I’ve wanted to talk about plotting for a while but I was waiting for a perfectly plotted movie to come along, and lo here it is. Perfect plots move heaven and earth without leaving a trace. It takes a tremendous amount of blood, sweat and tears to get every element in exactly the right spot, but if you’ve done it well, then it all seems to fall out that way naturally.

Let’s look at the climactic scene in Zootopia. If you haven’t seen the movie, then stop right now, because I’m about to spoil everything, but even if you have seen it, you could probably use a refresher:
So let’s talk about what was necessary to make this scene work.
So we’ll look how these things are set up over the next few days. Before we begin, however, I thought that we’d take a look at the one thing that they don’t really set up: How Mayor Bellweather knew to find them in the Natural History Museum. It kind of makes sense: They were driving the train car full of evidence to the police station when it crashed, but then they get out and Hopps says: 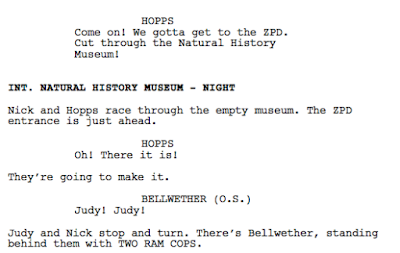 We heard the toxin-cooks warn the bad guy that Hopps had taken the train, and we know that the mayor is good at using the traffic cams to track people through the city, so she might have tracked the train, seen it crash, figured out that they would have to cut through the Natural History Museum to get to the ZPD, and gone to confront them. I guess it kind of makes sense.

The point is, you can’t get away with it. As we’ll see, you have to set up a lot of stuff, and there’s just not time to set up stuff like how the mayor tracked them down to that spot.  Sometimes you just have to hope the audience goes along with it. You have to know which things the audience needs to know and which things on which they’ll give you the benefit of the doubt.
Posted by Matt Bird at 3:18 PM

Labels: How to Plot a Mystery, Zootopia