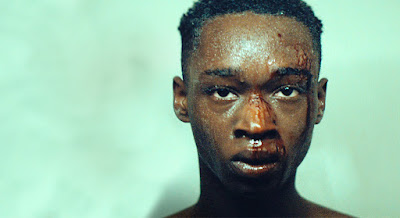 Does my sour mood extent even so far as this amazing movie?  It does!

The Problem: On the one hand, this is a pretty much perfect movie: It’s beautifully written, acted, directed, shot and scored. But, in keeping with the theme of the year, it still left a bit of a sour taste in my mouth. As is so often the case with wildly-acclaimed movies, I couldn’t help but hold it up against the praise it’s gotten (even though I saw it shortly after it came out). If you go to Rotten Tomatoes, you see praise like “avoiding clichés, shattering stereotypes”, but does it do that? All of the characters have some relationship the drug trade (Well, we never find out why Dev went to prison, but we can guess).

My biggest problem with this movie is that it gives straight white people exactly what they want to see of gay black sexuality: It’s sexless and brutally punished. Ultimately, this movie was more about inhumanity than humanity. The characters couldn’t breathe. I’m at the point in my life where I’m craving humanity, not inhumanity, when I go to the movies. Yes, I feel like a jerk for criticizing this movie, but I gotta call ‘em like I sees ‘em.

Storyteller’s Rulebook: Use the Power of Silence. The world will talk at your hero, but one of the strongest reactions your hero can have is silence. We see how Chiron’s silence isolates him, but also how it elicits both frustration and sympathy from those who try to reach him. Every time he refuses to respond, he asserts his power over the speaker more profoundly than he could by speaking, and becomes a more compelling character. It feels very counterintuitive to write dialogue in which there’s no dialogue, but it can be just as compelling as a two-sided conversation.
Posted by Matt Bird at 12:30 PM

Labels: Best of the Year, Dialogue

Longtime reader and huge fan, I think this is the first time I find myself disagreeing so strongly with you.

This was a bad movie. It wrongly assumes that the character's orientation and skin colour matters as much to the audience as it does to the characters, so it skips making the protagonist interesting in any other way. I thought that was pretty lazy.

Chiron was way too passive. The only time I felt myself rooting for the guy was when he broke that chair over the bully's back. It was a shame that his only true act of defiance was one of violence, which kind of left a bad taste in my mouth. I'm sure in real life being gay in this environment is an act of defiance in itself, but that simple fact alone wasn't enough to keep me invested in the character for an entire movie.

Kevin was the guy who we should have been following. His character was 3-dimensional and pro-active. With him, we could have had a fun first half: see him chase girls, smoke weed and jerk off dudes at the beach, as he struggles to keep his complex sexuality hidden from people who wouldn't understand. And then when he's forced into a crisis when he beats up Chiron, we would have truly felt the heartbreak of that situation. His coming out in the second half, then, would have been about more than just himself.
Now, I felt we didn't see enough of him to have his redemption at the end truly be earned. I only saw a gimmicky character forgive a guy who didn't deserve it yet, and I felt nothing at all.

And then there's the cringe-worthy dialogue at the beach, the schmaltzy over-the-top goodness of Juan (a character I liked for his warmth and fatherliness, but his on the nose sit-down with Chiron about homosexuality was way too easy) and the cartoony evil of the bully. I felt like it all could have used some subtlety.

I'm not trying to tell gay black men how to correctly relay their experience, by the way. I know I can in no way imagine what the director must have gone through in his life. I'm only trying to pinpoint what didn't work for me on a story-telling level.

I thought I would get in trouble for the negative things I said about the movie! Chiron is certainly passive, but I think that this is an interesting experiment in trying to getting us to care about him anyway.

I don't know why it took me to this point to watch this movie.

After seeing it I went to your blog to see what you thought of it structure-wise. I absolutely loved every minute of it. I thought it was ALL about humanity and most beautifully... tenderness. To watch men show tenderness towards each other is a rarity (the one thing I liked about CALL ME BY YOUR NAME).

There was SO much room to breathe but maybe you felt like there wasn't which would precisely be the point. The Main Character is boxed in, in an unimaginably claustrophobic psychological space. His arc had barely any room for movement and therein lies the tragedy.

(As far as Black folks being portrayed as drug addicts, drug dealers and cooks.) The stereotype that was broken was that they were portrayed in such ways that make the rest of us identify with their human struggles as universal emotional experiences. The movie showed compassion for them with such emotionally complex and intimate moments. We need more of that.

For the person who left a comment on your post: I can imagine it can be pretty disorienting for those mostly likely used to taking in these universal human experiences predominantly through the lens of White cisgender men and women. Trust me, it gets easier with effort.