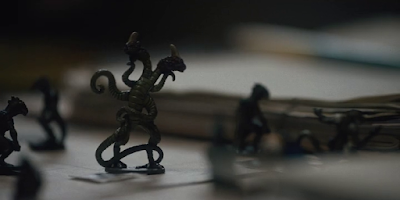 Let’s look at the second scene in the pilot for “Stranger Things”. After a scary glimpse of a monster killing someone in a government lab, we cut to four kids playing “Dungeons and Dragons” in a basement. Mike, is both the creator of the campaign and dungeon-master:
So what all does this exchange do for the story?
The good vs. good thematic dilemma that fuels “Stranger Things” is innocence vs. experience, represented here by the debate between protection (protecting both your safety and your innocence) vs. fireball (endangering yourself and your soul by killing). Will is forced to choose. It’s always great to begin a story with this sort of thematic question asked out loud, which not only establishes the theme, but resonates throughout the rest of the story. 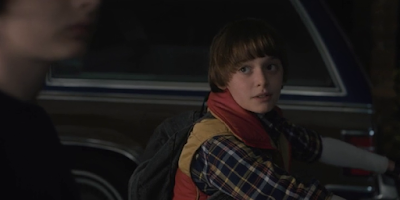 This quickly leads to another thematic dilemma: After Mike is called upstairs, Will finds the die and discovers that it was a seven. Lucas asks, “Did Mike see it?” Will shakes his head, so Lucas says, “Then it doesn’t count.” When they get outside, however, Will confesses to Mike:
Interestingly, this last exchange doesn’t happen in the script, reversing the meaning of hiding the roll. In the script, Will’s deception tarnishes him and seems to bring on his death, in a classic horror-movie sort of way (He chooses evil, therefore evil is done to him). In the finished version, it seems after Will’s disappearance that he was maybe too good to live in this world. The horror genre always invites us to blame the victim, one way or another.
Posted by Matt Bird at 12:00 PM

Yeah, I wouldn't say it's about making you blame Will for his misfortune so much as creating a situation in which the best of them, from the kids' perspective at least, is the victim. When the kid who least deserves it suffers, it makes the others more likely to act against their own interests and the rules of society to try to save him. Otherwise, leaving the problem to the adults would seem like a much more rational solution.