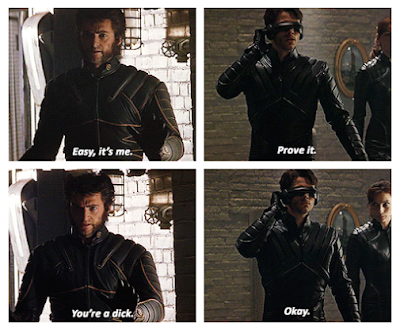 Okay guys, the book is due on Friday, so we’ve almost reached the end of this. Here are two checklist questions about dialogue that could sorely use some book examples

Is the dialogue more concise than real talk?

Dialogue should be as realistic as possible, with two big exceptions: It should be more succinct and have more personality. The danger, of course, is you’ll accomplish this by giving every character the gift of sparkling, sophisticated banter, but that’s not what I mean at all.

Instead, consider this exchange from the first X-Men movie, after Wolverine returns from fighting a shape-shifting villain:
That is one of the few memorable moments in the movie, but the offhand delivery of these three little words is enough to make Hugh Jackman a star and launch a franchise—and it’s the opposite of sophisticated banter. Never write a page of banter when three words will do.

Does the dialogue have more personality than real talk?

When your characters use endearments, that’s one more chance for you to give them a little more personality. Use something specific, something no one else in the story would say. Sometimes, you can even find language that amplifies the keynotes of their personalities:

The Friends of Eddie Coyle is well-known for its dialogue. I think the book is mostly dialogue.

Hemingway's story "Hills like White Elephants" is a dialogue piece that explains its characters entirely through how they talk. The characters speak concisely, though without style. A quick perusal of a Hemingway short story collection should net you a few good examples.

The absolute master of dialogue with personality was P.G. Wodehouse. Any of the Jeeves or Blandings stories could provide you with a few examples of how he combines tone with wit to reveal character and amuse the reader. A little googling found me these:

"Have you ever heard of Market Snodsbury Grammar School?"
"Never."
"It's a grammar school at Market Snodsbury."
I told her a little frigidly that I had divined as much.
--Right Ho, Jeeves

A good exchange everyone knows is Scrooge and Marley's Ghost in A Christmas Carol. The "more about you of gravy than the grave" section and the "I wear the chain I forged in life" passage right after it. You've got character -- Scrooge is a man of the world and afraid, the ghost is otherworldly -- and though nobody quite talks like either one, it still works.

A famous bit of dialogue with character and precision was the very end of The Sun Also Rises:
"Oh, Jake," Brett said, "we could have had such a damned good time together."
Ahead was a mounted policeman in khaki directing traffic. He raised his baton. The car slowed suddenly pressing Brett against me.
"Yes," I said. "Isn’t it pretty to think so?"

I mean, you could probably use Catch-22 in its entirety for this. Here's a couple more or less at random:

"I do not mind his not talking to Mrs. Long," said Miss Lucas, "but I wish he had danced with Eliza."

"Another time, Lizzy," said her mother, "I would not dance with him, if I were you."

"I believe, Ma'am, I may safely promise you never to dance with him."

"His pride," said Miss Lucas, "does not offend me so much as pride often does, because there is an excuse for it. One cannot wonder that so very fine a young man, with family, fortune, every thing in his favour, should think highly of himself. If I may so express it, he has a right to be proud."

"That is very true," replied Elizabeth, "and I could easily forgive his pride, if he had not mortified mine."

"Pride," observed Mary, who piqued herself upon the solidity of her reflections, "is a very common failing I believe. By all that I have ever read, I am convinced that it is very common indeed, that human nature is particularly prone to it, and that there are very few of us who do not cherish a feeling of self-complacency on the score of some quality or other, real or imaginary. Vanity and pride are different things, though the words are often used synonimously. A person may be proud without being vain. Pride relates more to our opinion of ourselves, vanity to what we would have others think of us."

"If I were as rich as Mr. Darcy," cried a young Lucas who came with his sisters, "I should not care how proud I was. I would keep a pack of foxhounds, and drink a bottle of wine every day."

"Then you would drink a great deal more than you ought," said Mrs. Bennet; "and if I were to see you at it, I should take away your bottle directly."

I've always quite liked this one from Philip Roth's Goodbye Columbus. It's the first conversation (over the phone) between the two main characters. The subtext is that he's Jewish and poor, she WASP and rich- and it comes out in everything:

"Hullo."
I launched into my speech. "Hello-Brenda-Brenda-you-don't-know-me-that-is-you-don't-know-my-name-but-I-held-your-glasses-for-you-this-afternoon-at-the-club . . . You-asked-me-to-I'm-not-a-member-my-cousin-Doris-is-Doris-Klugman-I-asked-her-who-you-were . . ." I breathed, gave her a chance to speak, and then went ahead and answered the silence on the other end. "Doris? She's the one who's already reading War and Peace. That's how I know it's the summer, when Doris is reading War and Peace." Brenda didn't laugh; right from the start was was a practical girl.
"What's your name?" she said.
"Neil Klugman. I held your glasses at the board, remember?"
She answered me with a question of her own, one, I'm sure, that is an embarrassment to both the homely and the fair. "What do you look like?"
"I'm . . . dark."
"Are you a Negro?"
"No," I said.
"What *do* you look like?"
"May I come see you tonight and show you?"
"That's nice," she laughed. "I'm playing tennis tonight/"
"I thought you were driving golf balls."
"I drove them already."
"How about after tennis?"
"I'll be sweaty after," Brenda said.
It was not to warn me to clothespin my nose and run in the opposite direction; it was a fact, it apparently didn't bother Brenda, but she wanted it recorded.
"I don't mind," I said, and hoped by my tone to earn a niche somewhere between the squeamish and the grubby. "Can I pick you up?"
She did not answer a minute; I heard her muttering, "Doris Klugman, Doris Klugman . . ." Then she said, "Yes, Briarpath Hills, eight-fifteen."
"I'll be driving a--" I hung back with the year, "a tan Plymouth. So you'll know me. How will I know you?" I said with a sly, awful laugh.
"I'll be sweating," she said and hung up.

Thanks so much, guys!

If it's not too late, here's a couple from Coraline, which has to be both inserting and concise as well as creepy as all hell:

"The mice do not like the mist," said the old man. "It makes their whiskers droop."

The old man leaned down, so close that the bottoms of his mustache tickled Coraline's ear. "The mice have a message for you," he whispered. "The message is this: don't go through the door. Does that mean anything to you?"

(Coraline has been trying to tell her neighbours that her name isn't Caroline and none of them listen to her. That the mice have given her correct name is all the proof we need that it's a true warning of danger)

"How do I know you'll keep your word?" Asked Coraline.

"I swear it," said the other mother. "I swear it on my own mother's grave."

"Does she have a grave?" asked Coraline.

"Oh yes, said the other mother. "I put her there myself. And when I found her trying to crawl out, I put her back."

The movie version adds an exchange between Coraline and the sardonic talking cat that's probably one of my favorite lines in a movie.

Coraline: what does she want from me?
The Cat: she wants someone to love. Our maybe she just loves someone to eat. It's hard to tell, with her kind.