Storyteller’s Rulebook: Should a Monster Ever Meet Its Metaphor? 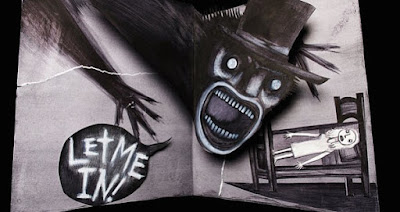 Are all monsters metaphors? Well, I’ve said before that every fictional story an author tells, even work for hire, is automatically a metaphor for his or her own experiences, so my answer is an always yes. But it usually goes further than that.

Almost every fictional monster is intended by its author to be a walking metaphor for a “real” issue facing the hero/heroine, at least on some subconscious level. Here are some common versions:
But that “≈” is a problem, isn’t it? Metaphors should never be 1 to 1. On the one hand, we want to tell a story that actually means something, instead of just creating horror for horror’s sake. On the other hand, we don’t want the metaphor to be too obvious or simplistic. We want one that can have a range of implications and interpretations. We want to be able to make complex, nuanced points. The vampires on “Buffy” represented sexuality in general, but every week they’d represent something else specifically.

For most of a horror story, of course, you don’t want the audience to be thinking about the metaphor. You want them to simply accept the monster as it is on the conscious level, even while they unconsciously squirm, semi-aware that this is a “monster” that also exists in their real lives.

The tricky part is the end, when the metaphor and the meaning often meet up, just briefly. You can see this at the end of The Babadook when the monster morphs into Amelia’s dead husband, who invites her to join him in death. It’s a controversial moment, and I think it contributes to the idea that this isn’t a “real” horror film for some.

Some say don’t do this whatsoever, or at least do it more subtly. Certainly one of the all-time great horror endings is Night of the Living Dead, in which the last survivor is a black man who is promptly shot and killed by the authorities when they show up. The cops don’t turn to each other after that and say (as they might on “The Twilight Zone”) “I guess we were the real monsters here,” but you get the point.

But I think somewhat on-the-nose ending of The Babadook works, for many reasons. For one thing, the emotions are so horrific (“I wish you’d died instead of him”) that it doesn’t break the spell to call them out. For another, the supernatural element isn’t waved away at that point: The monster remains a monster right through the epilogue. We get this moment where the subconscious rises to the surface, and then it plunges back down.

Most importantly, I think it works because Mr. Babadook is clearly not a 1 to 1 grief monster. After all, he enters the house as a creepy pop-up book, and we hardly associate those with grief! In fact, for me, even when I “got it” I didn’t fully get it yet. It wasn’t until a few hours after the movie was over that I finally put together the title’s true meaning, for example. ...But now we get back into the realm of unintentional metaphor. Here’s Kent on the name:
Did she really never notice that “The Babadook” was really “The Dada Book”? I doubt that, but it’s possible. In the end, it doesn’t really matter: Great horror creators speak from their subconscious to your subconscious, and the meaning that they intend or you construe has little to do with it.
Posted by Matt Bird at 8:00 PM

I think the sound of the monster's name also raises a reference to the dybbuk, "di-book", the clinging malicious evil spirit of Jewish mythology and Yiddish folklore, whether by intent or shared cultural unconsciousness.

The dybbuk monster was brilliantly employed in both David S. Goyer's 2009 horror movie 'The Unborn' and in 'The Possession' (2012), directed by Ole Bornedal and written by Juliet Snowden and Stiles White.

When I watched Jennifer Kent's excellent film, I couldn't help thinking at first the monster's name was simply a play on 'its-the-book'. I think your dada-book is a great insight on the film and the deeper issues it works through so well. It's a great film that show's what Aussie film-makers can do - but have not been doing enough recently (Mad Max Fury Road sucks!)