Rulebook Casefile: The Way the World Worked in Bridge of Spies

Okay, let’s take a little break from the checklists. This week we’ll cover one recent movie I loathed and one I loved. 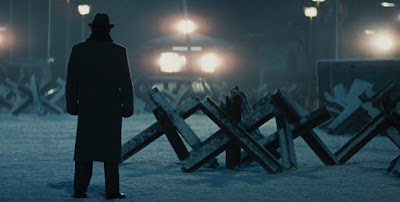 You’ll recall that a few years ago I said of Lincoln “How could a director this bad make a movie this good?”, which led to quite a bit of pushback in the comments, both at the sentiment and the snide tone. Leading the counteroffensive was James Kennedy. Now I’ve moved into James’s neck of the woods, and he, puckishly, invited me out to see Bridge of Spies. A fun time and much lively discussion was had, but, alas, our Spielberg summit failed to achieve détente: Boy oh boy did I hate this movie.

I could write a book about everything I thought was wrong with this movie, but I will magnanimously constrain myself to three blog posts, and attempt to draw lessons therefrom.

Problem with Bridge of Spies #1: That’s Not the Way the World Worked

In deference to my host, I constrained the urge to guffaw several times, and, to my credit, failed only once:
If you have any years on you, your eyes have probably rolled right out of your head at this point. Even 35 years later, when I was in college, you couldn’t walk up to a payphone in Indiana and call another state simply by plopping in a few coins. In 1962, If you wanted to call the US from a German pay phone, it would require several operators on both sides of the Atlantic, at least one of whom would inform his wife she was getting a call from Germany, and even if they didn’t, she would be well aware simply because it would sound like it was traveling all that way. Long distance at the time was essentially a series of tin-can phones. Most intercontinental business was still handled by telegraph.

So who cares? Can’t we cut period pieces a little slack? What does it really matter? Indeed, I could practically hear the off camera discussions, in which several people on set quietly insisted to Spielberg that this made no sense, and he blithely responded with a chuckle and that old chestnut: “If they notice that, we’re not doing our job!”

They did, and you weren’t.

There was a reason that, back when I used to direct, I banned that phrase from the set. It originated in the editing room as a way to philosophically accept unavoidable continuity errors when it was too late to reshoot anything. At some point, however it drifted onto the set itself, even though there was still time to fix the mistakes, but they just didn’t want to.

If you have contempt for your audience, you can’t hide it. They’ll know.

The Coen Brothers are the credited rewriters of the film, and there are a few scenes that bear their stamp, but clearly many uncredited rewriters (or perhaps the original writer) smothered their wit and acuity with slapdash layers of Spielbergian goop. Indeed, this movie is in stark contrast with the Coens’ own period films, with their meticulous eye for detail and endless fascination with the fabric of the past. Inside Llewyn Davis was set in the same era, and felt startlingly real in all the same ways that this movie felt lazily false.

But which era is that? The movie begins with “1957” emblazoned on the screen and that’s the last date we get. At that point we meet Hanks’ standard trinity of adorable tykes, and their gee whiz fascination with his work. At the end of the movie, after a long twisted path of international diplomacy, Hanks extracts Francis Gary Powers from behind the Berlin Wall and returns to his family. Again, they think he’s been fishing, and they have no idea that he was involved, but when he comes home he finds all three kids, who haven’t aged a day, watching TV in the middle of the day, and hopping with joy to see a news report that Powers has been released.

Where to begin? First of all, if they don’t know their dad is involved in this case, why on Earth do they care? As I said to James afterwards, this would be the same as me coming home to find my kids shouting, “Daddy, Daddy, Bowe Bergdahl’s been released!”

But the bigger issue is the children’s unaged vampire state! Okay, I get it, Spielberg couldn’t be bothered to recast, but come on! Clearly, he was just assuming, “Whatever, nobody will be able to do the math and figure out that at least five years have passed at this point. Nobody will remember that that the Berlin Wall didn’t go up until the ‘60s, and I’m not certainly not going to tell them!”

Spielberg desperately grasps at every heartstring he can find in an attempt to force us to care about the events of the past, all the while flipping off anyone who actually cares. At this point, he is so confident of his ability to create his own world that he believes that reality is an inconvenience reserved for lesser directors.

Don’t do this. Don’t do what the final writer of this movie did, whoever he or she may be. Yes, a great writer can make any audience care about any situation, but that only works if you care first.

We should start a podcast, "Two Friends Who Disagree About Everything."

I'm just here to point out that when I tried to call Pennsylvania from an East German payphone two years *after* the reunification, and only one subway stop away from Berlin, I couldn't do it. No amount of operators could intervene. That is what payphone were like.

Hold up, I'm confused. If Hanks's character is in Germany for so short a time that the fishing trip ruse would work, then the children would not have visibly aged so much that recasting would be needed. Is the complaint that per the story he was away for so damn long that the "fishing trip" must have been months or years long, the cover lie nonsense, and the kids should be aged?

In very slight defense of Spielberg's choice of the kids' reaction to Powers's release, I'm pretty sure the release was a very, very big deal in 1962.

That said, I avoided this movie for the suffocating sense of Dad-ism that came from the promos. That smothering smugness of the Dad Who Knows What's What and Gently and Firmly Tells Us What It's All About. Ugh. Was that how it felt?

I should clarify that the first half of the movie covers the Rudolph Abel case, starting in 1957, and we first meet the kids on the day Hanks takes that case. The second half covers that case's strange sequel in 1962, when Abel is traded for Powers in Berlin. It is only for the 1962 trip that Hanks is pretending to be on the fishing trip. Rather than acknowledge the fact that these are two separate stories many years apart, Spielberg just smooshes everything together, even if that means the Wall has to go up in the '50s.

Anyone who was a kid in 1962 can chime in, but I'm fairly confident that no kid would care. It's never good to assume that people cared then about things that seem significant to us today. As with Bergdahl, the release of Powers would have made the evening news, and the average well-educated adult would take note, but it wouldn't have been breaking midday news and kids wouldn't have cared either way. It was only as a result of the Cuban Missile crisis, several months later, that the Powers case took on more weight in retrospect. (The Missile Crisis, by contrast, would be one of the few times that kids *were* acutely aware of the Cold War, because they were suddenly in actual danger.)

More on the smooshing next time, as well as the Dad-ism problem.

Another gaf is that he returns from Germany where it is the dead of winter, to Brooklyn where there are green leaves on the trees.