Straying from the Party Line: Overdoing the Ticking Clock in the “Scandal” Pilot 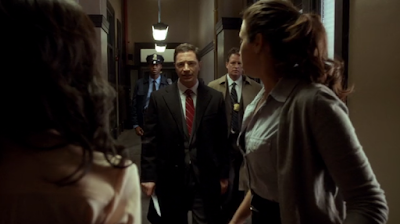 Ticking clocks are great. They escalate tension and stakes. They create a sense of urgency. They pre-establish the ultimate goal and clarify the main dramatic question. But they must seem natural. If they go too far, and violate our sense of how the world works, all that good will suddenly be reversed.

“Scandal” is a show with built-in weekly ticking clock: They’re trying to get out in front of scandals before they become known to the public, and that impending danger is always nipping at their heels.

The pilot does a nice job of making the clock more explicit: After the blood-covered war hero stumbles into Olivia’s headquarters after midnight, she heads over to the D.C. district attorney, wakes him up, and tells him that she doesn’t intend to hand over her client for another 24 hours, and she’ll politicize it in the press if he shows up before then. This is a stretch, but it’s believable enough for TV. This is a huge high-profile arrest, and a political football, and the D.A. might give some leeway to a well-connected bulldog defense lawyer.

But then things get needlessly silly. Just when the case is faltering, the D.A. and the police shows up at Olivia’s door with a warrant, but she brashly tells them that she still has 40 minutes on their agreement and so they reluctantly agree to stand outside in the hallway for that time while Olivia’s team tries one last hail-mary to find the alibi.

Audiences have a sense of how the world works, and they generously allow a certain amount of wiggle room beyond that. Most stories, after all, are about extraordinary crisis situations, and in that high-stakes world the rules for what would usually happen are allowed to stretch a bit. But come on, people. Don’t violate our good will.

Why do this? Why not just have Olivia say, “The D.A. might be here in less than an hour! Get me something!” Because TV networks love visual ticking clocks, and pilots especially often have such ludicrously exaggerated scenes. Does this mean that spec pilot writers should include such scenes? Probably not. Don’t voluntarily sacrifice plot logic before they get a chance to take it from you.
Posted by Matt Bird at 9:19 PM

I've seen a couple of other events at other places, but this was my first time in here. It was amazing! Great event venues, it's smaller than those bigger places but it is still a fair sized venue. Food was great and I think it's recently renovated - it didn't seem old or anything.

Breaking Mad (user that commented above) is a link spammer that posts comments so they can insert a link to the website that hired them. The same comments has been posted almost 100 times on other blogs. Here's a search for a string of text from your comment so you can see for yourself that these blogs all have the same comments with a link to some page on the same site. https://www.google.com/search?q="smaller+than+those+bigger+places+but+it+is+still+a+fair+sized+venue.+Food+was+great+and+I+think+it%27s+recently+renovated"

Make sure you mark them as spam and feel free to delete this comment.

thank you for the information provided, we are waiting for the next info