Storyteller’s Rulebook: Not All Determination Needs to be Grim 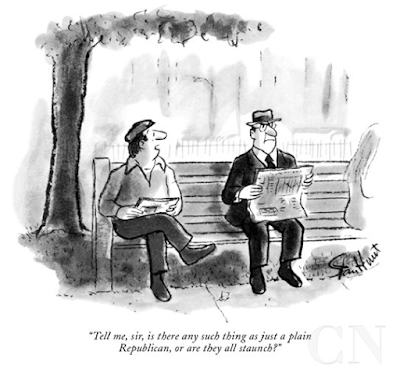 Just as we only ever seem to find “staunch Republicans”, another two words that always seem to go together is “grim determination”. Therefore, when we write, the easy fallback position is to pair those two qualities together.

But The Fugitive shows how much fun it can be to separate the two: U. S. Marshal Gerard could not be more determined to catch Richard Kimble, and the standard way to show that would be to render him increasingly angry and humorless. Indeed, on first glance, we might describe Gerard that way, but one closer inspection it’s not true. 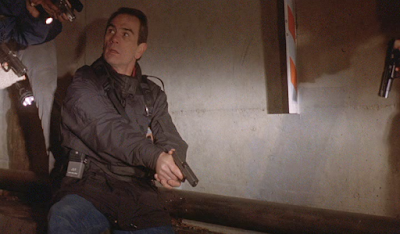 Tommy Lee Jones won an Oscar for this movie, which is astounding, because this sort of part would never normally be nominated. As is so often the case, Jones hadn’t just acted the hell out of the script, he had also tweaked the dialogue in subtle ways. You might assume that Jones would crank up Gerard’s intensity to amplify his dramatic impact, but no: All the great badass lines were already in the script (such as “I-don’t-bargain.”), According to Davis’s DVD commentary, Jones’s additions were almost always technical jargon or goofy asides, such as “We’ve got a gopher” (“Here’s another Tommy line. He’s always looking for goofiness.”) Other Jones lines included “Think me up a donut” and, most famously, “I don’t care!”.

What makes this movie so wonderfully rewatchable is the lovable-but-hyper-competent camaraderie amongst the marshals. They’ve discovered something that no other movie heroes seem to know: you don’t have to be grim to be determined. Indeed, one thing that makes them so scary is that they do such impressive work without getting upset about it. They’re used to working this hard, and they trust themselves to do this. This is a challenging day at the office, but it’s ultimately just that, and there’s no reason to break their routine. As it plays out, that feels utterly bad-ass...and utterly refreshing for audiences tired of lazy “first choice” characterization.

Just as we only ever seem to find “staunch Republicans”, another two words that always seem to go together is “grim determination”. Therefore, when we write, the easy fallback position is to pair those two qualities together.

Off-topic, but hey: a running gag in the writers' room of The Simpsons in the early Aughts was playing with the phrase "full-blown AIDS."

Great insight Matt. And I think the issue is a reflection of society as a whole.

We now walk around wearing our stress as a badge of honour. Anyone who does their job and seems happy and at ease is deemed to not be doing it properly, or not taking it seriously enough. The corporate workplace (and many others) subconsciously reward this stressed out behaviour to it becomes prevalent. It starts with the basic concept that if you walk around angrily staring at a piece of paper no one will bother you, and they certainly won't give you more work to do.

Which is unfortunate, given that stress comes from an inability (or at least a perceived inability) to do the task at hand. We should reward people like Gerard's crew, they are the true professionals.

(with regard to U.S. Marshall. It's okay, but pales in comparison. Snipes' special skill is kicking ass, which by comparison is boring and prevents us connecting with his character as much as we did with Ford)

I don't know, this film does it pretty well, but is this kind of unfazed quippy action hero really all that unique or refreshing? Not that it's not really likable, but I feel like Jones' wisecracking procedural tough guy shtick would be at home in hundreds of other contemporary films and TV shows.

If you ask me, there's not enough grim determination anymore. You turned me on to THE SANDBAGGERS. I'd love to see a contemporary cable procedural that had the stones to be that purely workmanlike, bleak and relentlessly humorless.

I miss not only shows like THE SANDBAGGERS, but even shows like good old-fashioned LAW AND ORDER prime, which was a very serious show. It was sort of the opposite of escapist TV: It was "I want to be concerned about a serious societal issue for an hour." You were checking out of your own chucklehead life and into a world where you could enjoying thinking seriously about serious things (that wrapped up neatly in 42 minutes)(Actually, that's not fair, in the early days, many of the resolutions were far from neat, but they never spilled over into any other episodes.)

It's not a bad film. It dutifully follows many action film conventions but it also keeps some of the things that made the original great like keeping the setup hidden and maintaining the original personalities of the marshals. I enjoyed it. I think you would too but don't expect it to eclipse the original. It's definitely a movie for your bucket list.