Straying from the Party Line: Do the Right Thing's Omniscient POV 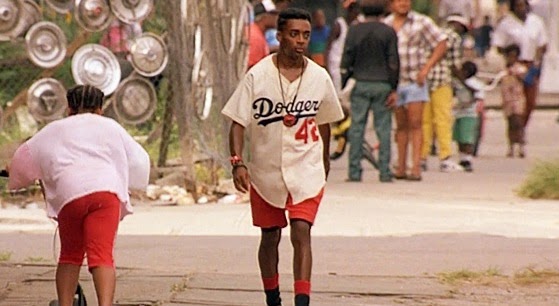 So we’ve established that, unlike most movies, Do the Right Thing has a passive protagonist and it’s not about the solving of a large problem. This movie isn’t about a crisis that necessitates a series of tough decisions, it’s about a series of lightly-taken decisions that unexpectedly culminate in a crisis.

This brings us to another unusual thing about this movie: Many elements are not introduced from the POV of the hero.

If you think about it, this is kind of odd: Sure, there’s a huge cast, but it’s all limited to one block, and Mookie is constantly on the move and friendly with every character, so wouldn’t it make sense to simply introduce each new element in the movie from his POV? This is the way things are done in everything from “The Sopranos” to “Harry Potter”, after all. But instead, the camera chooses not to favor Mookie, jumping ahead of him or away from him several times, and introducing new elements on their own.

At first I found this very odd, but I think it makes sense: we have to cut away from Mookie’s POV so that we can see what he can’t see. After all, if he saw all of the same foreshadowing that we see, we would get too frustrated with him for not seeing the disaster coming. Ironically, this is one case in which we must sever our POV in order to maintain our empathy, because this assures us that Mookie couldn’t have predicted what we can predict, given our more-omniscient POV.

To a certain extent, the “antagonist” is merely the heavy hand of fate creating a tragedy that nobody wants, and the “protagonist” is not Mookie but the omniscient camera itself. Only the camera sees what no one person in the neighborhood can see: all of the little slights and frustrations that build up.

When we come back to this movie, we’ll take a closer look at that ironic sequence of events, but first, by request, I start off next week with my thoughts on the hit podcast Serial...
Posted by Matt Bird at 4:00 PM

Labels: Character, Do the Right Thing, Straying From the Party Line