Here’s one last tangent I saved up from James Kennedy’s epic Star Wars response, discussing the section where the droids blunder their way across Tatooine:
Do I agree? Not entirely. At the risk of sacrilege, I feel like the droids wander around on the planet for a little too long. The movie is 123 minutes and I feel like this was the place to cut those extra three minutes out.

That said, I do agree with James that it was brave of Lucas to create the Jawas and give the droids some wandering around time. Part of the appeal of the movie is that it’s filled with such utterly strange and seemingly random details that don’t really “make a point” (What do the Jawas mean? What would the story lose if they were taken out?) but just make this feel like an endlessly strange and fascinating world, so it’s a plus that the details don’t all back up the theme. 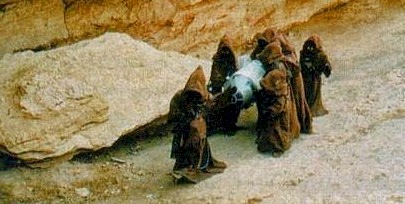 This also speaks to the movie’s shaggy-dog plotting. There’s very little set-up and pay-off. There are no verbal callbacks. We never cycle back around to anything (never go back to Tatooine, etc.) or cut ahead (introducing the rebel base before Luke gets there, etc.) This creates a sort of meandering all-over-the-galaxy plot-progression that’s actually quite thrilling in an off-kilter kind of way.

In short, this movie is loose. This was a huge risk. Persistent verbal and visual pay-offs are very satisfying to an audience, and details that all reflect one subtle thematic dilemma can build up tremendous power. By keeping many of its details and plot turns loose and semi-random, the movie gambled on a very different type of appeal: scruffy charm.

This unusual strategy succeeded brilliantly. All of that randomness created a sense of utter reality: who could make this stuff up?? The immensely appealing characters draw us into this weird world and make us feel welcome, at which point all of the bizarre details and plot-turns become fascinating rather than alienating.  It was a trick that dozens of space-opera follow-ups tried to duplicate, with no success, but in this case the risk led to a huge reward.
Posted by Matt Bird at 5:24 PM

I remember C3p0 helping to burn the Jawas' bodies after the stormtroopers massacred them, which would have lost a bit of emotion if they had been cut earlier.

That's a good example of the depth of detail here. 3PO feeling sad for a dead Jawa is about ten steps removed from the central narrative of this movie, but it makes the world (both the outer world and the inner worlds) feel so rich and complex. Like Tolkien, Lucas gets so deep into his own world that the characters just start doing whatever they naturally want to do, without anyone worrying about the needs of the story.

Thanks again for including my ramblings, Matt. I wonder if this might motivate you to revisit your "it comes right out" rule from a while ago, or at least tweak it to account for this kind of storytelling --

You have claimed before that a hero should early on have a "moment of humanity" -- you write, "Your heroes have a lot of work to do, so it’s tempting to simply hit the ground running, and instantly start dumping problems on your hero’s head until he or she is ready to stand up and do something about it," but before that happens, to truly bond us with the hero, you recommend that one of the things a good script should do is give us a point early on in which "the hero cracks wise, or does something out-of-character, or is compassionate, is comically vain, or has a unique-but-universal moment, or an oddball moment." Since STAR WARS don't have a hero until 17 minutes into the movie, the movie must accomplish its oddball moment via the world itself! That is, through the Jawas. Put in terms of THE FRENCH CONNECTION, the Jawas are the equivalent of STAR WARS saying, have you ever picked your feet in Poughkeepsie?

Great comment, James. I think you're on to something. The hero's "moment of humanity" is an answer to the question of "Why should we care about the hero?" And that question is really just a mirco version of the audience's macro question: "Why should we care about -- or even believe in -- this world?" All of the little weird details might be called "moments of reality," the world-building correlates to the character-building "moments of humanity."

The generation of sci-fi storytellers who came of age in the 1970s often speak about the influence of Ridley Scott's work, particularly in BLADE RUNNER and ALIEN which both embodied the idea that a movie's vision of the future should be as dirty and chaotic and layered with remnants of the past as our world is. William Gibson is one of the writers who speaks often about his revelation of this "dirty future," one distinctly different from the images of pristine environments in something like STAR TREK. But it's not only the production design that makes these films feel believably lived-in, so much as it is the fully imagined commitment of the writing.

Thanks again to you and Matt for this interesting series of discussions.

>Same with how HARRY POTTER spends time at Diagon Alley -- why not take Harry straight to Hogwarts, “get to the story”?

To establish that Normal World sucks, so Magical World can be awesome. You can’t establish that with just one scene.
Get some reality in it could be done anywhere, plus, it’s somewhat exaggerated anyway.

Also, it’s nothing like the pointless rambling in most fantasy stories that really should be cut, and actually is absent in most good stories like those of Brandon Sanderson.