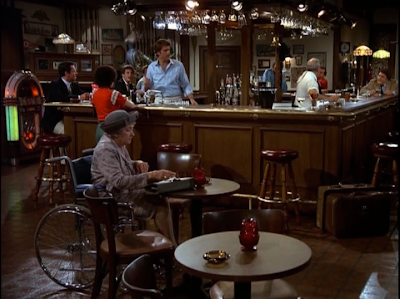 If you watch the “Cheers” pilot, you’ll see typical shots of random extras in the background enjoying the bar, but one of them stands out: a flinty-looking old lady in a wheelchair, drinking alone. This is a glimpse of what might have been, because she was supposed to be a regular character. Here’s veteran staffer Ken Levine on his excellent blog, explaining what happened:
If you look at the script, the final version is almost verbatim the way it was written, with the exception of all of Mrs. Littlefield’s lines being cut out. She’s very funny, but you can see why she had to go: 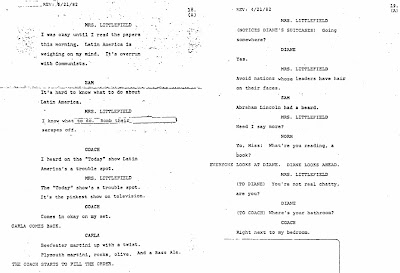 But, that said, the show was political, just in a different way. Let’s look at the amazing cold open:

There is so much packed into this.  Yes, it’s funny, and it introduces our setting and central character, but it’s also a bit of a mission statement:
Mrs. Littlefield was an attempt to inject partisan political humor into the show, but it didn’t work, because the show was really about class politics, albeit only implicitly, and that was a subtle source of its power.
Posted by Matt Bird at 8:00 PM

Kudos for another excellent piece of practical writing advice, deft analysis and -- really calling it what it is -- scholarship. This reminds me of your previous posts about the changes to the opening of CHINATOWN and about Matthew Weiner's influence on THE SOPRANOS. Nothing like primary sources to validate your hunches or illuminate your ideas in wholly new dimensions.