Rulebook Casefile: The Importance of Being Good at Your Job in “Mad Men” 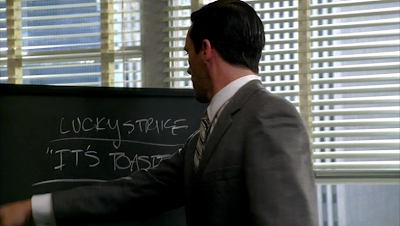 One thing that “Mad Men” has always been great at is the subtle build to an upheaval, where a momentous thing seems to happen with no warning, until we realize that we’ve seen signs slowly piling up all season long. They pulled this off with Peggy’s in-denial pregnancy in season one, Don’s impetuous marriage at the end of season four, and Don’s firing at the end of season six.

Throughout season six, a funny thing happened in the print and online commentary about the series: there were several articles along the lines of, “Gee, Don’s misbehavior is no longer charming, and I don’t know why.” As it turned out, they were having exactly the reaction they were supposed to have: Weiner wanted to show what happened when Don’s charm finally soured on his perpetual victims, but a side effect of Don’s failing magic touch probably did the most to sour the audience’s reaction: they were subconsciously reacting to the fact that Don was no longer good at his job.

These baffled critics had failed to notice something that’s gospel for every network exec (and something that Weiner knew full well): It’s very hard to care about a TV character who isn’t good at his or her job, even if --especially if-- you disapprove of that job.

This was true of all of the antihero shows that arose in that period: “The Sopranos”, “The Shield”, “The Wire”, “House”, “Breaking Bad”, etc. The more ambiguous the morality of the show, the more unambiguously talented the hero had to be. They were breaking all the rules of TV...except the big one.

We watch “Mad Men” on several levels: on one level, we contrast our current “enlightened” era to the bad-old-days of good-old-boys, and we archly disapprove of Don’s terribleness, but while we do that, we’re also inside of the world of the show with him, and we’re rooting for him to run circles around his fellow creeps.

One of Don’s many ironies is that he’s not able to see the larger futility of his lifestyle, but he is able to see the faults and hypocrisies of his contemporaries much better than they do, and sometimes even better than we do, even with our greater perspective. And we love that.

Just look at the pilot: Only Don can solve the cigarette problem, because only he has accepted the meaninglessness of the emotions they’re selling. It’s dazzling to watch him explain the hidden nature of advertising to his co-workers and his clients, because this is our favorite type of tradecraft: news we can use. Even though we see his world so much more clearly than he does, and judge him harshly for his blind spots, he’s also explaining our world to us in a way that we’ve never understood it before.

As the show progressed, we sometimes unambiguously wanted Don to succeed, as with his inspiring pitch for slide-carousels, and other times we were disgusted by his success, as with Lucky Strike, but either way, we were glad that we were on the winning side. Whether he used his power for good or ill, that power made him our beacon. We followed him down a dark path, but he was the brightest light on that path, so naturally we clung to him for illumination. 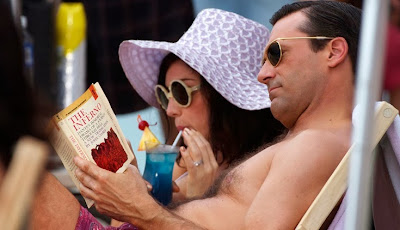 Don began season six by reading “Dante’s Inferno” while attempting to relax in paradise. For six seasons, he has been our Virgil, the most enlightened ghost from a pre-enlightened era, and therefore our ideal guide to this hellish world. But now he’s grown both weary and wary of that role.  Even the smartest guy in hell is still in hell.

Like all great characters, Don’s greatest strength is the flip-side of his greatest flaw. And like all great TV characters, he has always felt that he’s stuck in a place where he cannot shed one without shedding the other, that he can’t stop his pathological lying without giving up his professional dominance. In the sixth season, his worst fears came true. As soon as he got tired of lying, everyone in his life got tired of him.

Going into the final season, the question is whether or not Don can once again rebuild a better life from scratch. He’s sick of being that lone torchbearer heading down that dark path (even if he wanted to continue, he can’t, because his flame has now been snuffed out) so he’s decided to crawl out towards daylight instead. Some casual viewers see this and roll their eyes: “Hey, that’s no fun!” But for fans of truly great TV, the show has never been more powerful and electric with possibility.
Posted by Matt Bird at 12:00 PM

Holy shit. You are some kind of freaky genius: you just brought into sharp relief all my own half-formed thoughts about the progression of Don's character and what that had to do the intersection between character+work, (and why that makes some Sorkin shows work, and some be terrible, for that matter.) and... pretty much all the things.

(This was a great blog post. Thank you for sharing it with the internet.)

Yeah, seeing how Don is "losing his touch" is very much in keeping with the themes of the show. It's painful, but it works.

Also, notice how in season six, all of his pitches that we see never show the product? Yeah. Then comes the climactic moment with Hershey's, when he talks about a product so amazing that the inside and the outside were the same thing, and how he longed for that, how he hoped they would never advertise. It veered close to the edge of ridiculousness, but it didn't go over.

I'm excited about the last season, since there's so many ways it could go. Weiner said that he pictured Don ending the sixties in an ashram. (Though he also said that he would skip the Kennedy assassination.) The last season is open so much wider than most "final seasons" could be.

Though splitting the final season in half like that without adding more episodes...dick move, AMC. Dick move.

I'm convinced that they did that just so that they'll finally have an Emmy season where they don't have to compete with "Breaking Bad". It's a crime that Hamm has never won, caused largely by the historical accident of being up against the equally-legendary performance Cranston every year. (Of course, there's no excuse for giving it to Daniels last year, a good actor stuck in an idiotic Mary Sue role!)

Ditto what Elana said. Posts like this are the reason I love your blog. You've completely changed my mind about what MAD MEN was up to last season and what it has left to tell us about Don's story. And you've enlightened me about writing in the process, with a new perspective on a number of ideas you've covered individually before, but that take on a new resonance with this particular case study.

I'm looking forward to more great posts in 2014 and maybe your book too. Thanks for existing and Happy New Year!

Thanks, guys! I am nothing if not passionate about this show.