What the Internet Was Made For: Star Wars Trivia Debates! 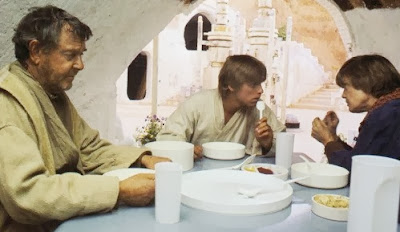 Just to let you guys know, I do see (and appreciate) all the comments that appear on old posts.  Sure enough, a comment by Alex Withers just popped up on this old post, claiming that Luke actually wanted to join the imperial air force when he was on Tattooine:
I searched the internet for backup on this, and sure enough Luke’s wikipedia page says the same thing!  But I say this can’t be true.  Yes, it’s weird that the clandestine rebels would have their own air force academy, but it makes more sense than the alternative:  Luke says he hates the Empire, after all, and when he finally does join the other rebel pilots, he’s not surprised to be reunited with one of those friends who went off to join the academy ahead of him.  Clearly the rebels have an air force, so it must train somewhere, right?

I know I have some hardcore Star Wars folks here, so what say you?

No, your commenter is right. The Flight Academy that Luke wants to attend is not an underground thing. After you are trained the Empire drafts you in. There's a deleted scene in which Luke is hanging out with his friends on Tatooine and his old friend Biggs shows up, who is in the flight academy and is visiting on leave. Here's the scene:

And here are the relevant lines:

BIGGS
Luke, I didn't come back just to say good-bye... I shouldn't tell you this but you're the only one I can trust... and if I don't come back, I want somebody to know.

LUKE
What are you talking about?

BIGGS
I made some friends at the Academy.
(He whispers)
...when our frigate goes to one of the central systems, we're going to jump ship and join the Alliance...

LUKE
Join the rebellion?! Are you kidding! How?!?

BIGGS
Quiet down will ya! You got a mouth bigger than a meteor crater!

LUKE
I'm sorry. I'm quiet. (He whispers) Listen how quiet I am. You can barely hear me...

LUKE
You're crazy! You could wander around forever trying to find them.

BIGGS
I know it's a long shot, but if I don't find them I'll do what I can on my own... It's what we always talked about. Luke, I'm not going to wait for the Empire to draft me into service. The Rebellion is spreading and I want to be on the right side - the side I believe in.

BIGGS
I thought you were going to the academy next term. You'll get your chance to get off this rock.

LUKE
Not likely! I had to cancel my application. There has been a lot of unrest among the sandpeople since you left... they've even raided the outskirts of Anchorhead.

BIGGS
Your uncle could hold off a whole colony of sandpeople with one blaster.

LUKE
I know, but he's got enough vaporators going to make the place pay off. He needs me for just one more season. I can't leave him now.

BIGGS
I feel for you, Luke, you're going to have to learn what seems to be important or what really is important. What good is all your uncle's work if its taken over by the Empire?... You know they're starting to nationalize commerce in the central systems... it won't be long before your uncle is merely a tenant, slaving for the greater glory of the Empire.

LUKE
It couldn't happen here. You said it yourself. The Empire won't bother with this rock.

LUKE
I wish I was going... Are you going to be around long?

BIGGS
No, I'm leaving in the morning...

LUKE
Then I guess I won't see you.

LUKE
Well, I'll be at the Academy next season... after that who knows. I won't be drafted into the Imperial Starfleet that's for sure... Take care of yourself, you'll always be the best friend I've got.

I wish everyone would stop talking about Star Wars forever.

Okay, James, that makes sense: the Rebel Alliance just sends their folks to the Imperial Academy, grooms them to defect, and then poaches them from that school as desired. Still, this confirms my basic feeling: By the time he has that conversation with his aunt and uncle, he wants to join the academy in order to join the Rebel Alliance.

"Anonymous," however, is 100% totally right, and has ably demonstrated his superiority to this discussion. Go, Anonymous!

An interesting footnote. But for me this is another good example of how overcomplicated exposition and world-building details that writers fixate on and concoct elaborate (and often bad) scenes to convey aren't in the end all that important to the audience. All we need to know is that Luke wants to fly like his friends but isn't able to train with them because of his family obligations.