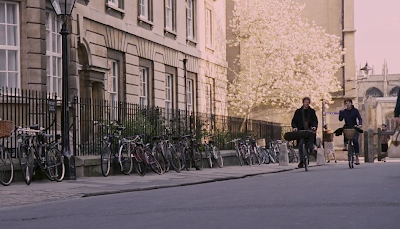 Yesterday, we looked at one reason why the “third act” of An Education is so short: the story isn’t as interesting once Jenny has dumped her con man fiance, and we don’t want to watch her study for her tests.  That works out just fine.  Nobody misses those beats, and the ending is still satisfying.

This was true in Nick Hornby’s script as well, but somewhat less so.  Director Lone Scherfig is extremely faithful to the script overall, but she cuts several exchanges out of the last part of the script, and replaces the last page entirely.  These judicious cuts made the movie much better, and exemplified the importance of not allowing the characters to process the theme.

In the finished film, we end with Jenny, at Oxford, happily riding a bicycle through campus with a boy she seems to be dating, as we hear a voiceover (for the first time in the movie), saying that she tried to forget the whole thing, and one day, when a boy asked her to go to Paris with him, she said yes... “as if I’d never been.”  Fade to black.

On the last page of the original script, we also have Jenny bicycling through Oxford, but then, one day... 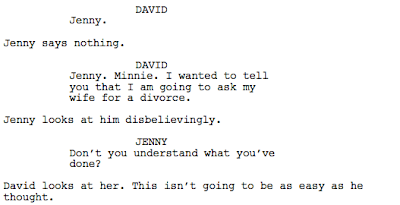 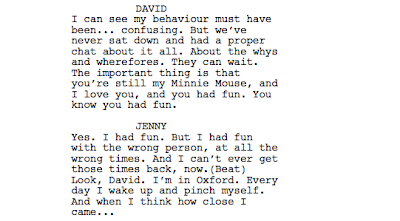 This is way too much closure. What’s so great about the final onscreen ending is that it’s haunting. She never expunges the ghost of David, so he hovers over her whole life. She can pretend that it never happened, but she’ll always know better.

Director Lone Scherfig knew she had a brilliant script  on her hands...but she also knew that the last page blew it, and a better last page would make it a classic. She kept pushing until she found the last page the movie needed.

But wait, we’re not done!  Tomorrow, we derive a new rule from this movie, and what it does better than a certain Oscar-favorite screenwriter...
Posted by Matt Bird at 8:00 PM

This is also the difference between a more open-ended, novelistic -- dare I say emotionally "realistic" -- approach and the kind of philosophy espoused by more conventional Hollywood screenwriting advice gurus and by the worst kinds of studio notes. I just screened A WOMAN UNDER THE INFLUENCE again. And not only is the ending of that film haunting and ambiguous and open and unspoken like so many things in life but so are the dozens of other key moments that make it so great.

I'm always especially suspicious of coming of age stories that wrap themselves up too neatly. Because the true subject of most great stories about growing up is the recounting of the protagonists' first encounter with the irreducible complexity, strangeness and irresolution of existence.

Yes, I agree. Really, in a good period coming-of-age story like this one, the real third act is the writing of the story itself. Only, now, all these years later, can they come to grips with it and settle the score by putting their cri de couer out into the world.