How to Create a TV Show, Addendum: Your Show Must Have Appeal

Okay, guys, I think this is my last piece of TV backfill, and then we can get back to other stories…hopefully I’ll get that new Ultimate Checklist up this week! 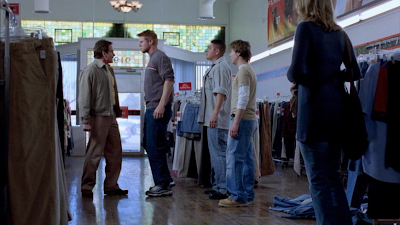 So I was writing the last piece, about how the pilot must capture the appeal of the show, and it occurred to me that there was something more elemental that hadn’t been said… Your show must have appeal.

This may seem perfectly obvious…After all, doesn’t every story need to have appeal? Well, no. Every story must satisfy the urges that get attract people to that genre, but some genres don’t promise “appeal” per se.

This is true of very serious dramas, bleak crime movies, and dystopian movies. In a stand-alone story, if you’re willing to limit yourself to a very grim-minded audience, then you can simply present a story that goes from bad to worse and then ends, and that’s perfectly legitimate. This is because you’re not asking anybody to come back next week. Nobody would come back for week two of The Silence, or Mystic River, or Clockwork Orange, and that’s fine.

Of course, we now have a lot of seemingly bleak shows on TV, where the viewers are encouraged to think of themselves as very serious people without any desire for emotional gratification, but this is just an illusion. TV shows (and other continuing stories) have to work much harder than movies (and other stand-alone stories) to assure the viewer that it won’t all be downhill.

In a TV pilot, no matter how bleak, there needs to be a moment that makes the audience say, “That’s appealing. I want to see that happen every week.”  To a certain extent, this can merely be base appeal (sex, violence, death), but it almost always has some positive element as well, no matter how small.

Since it’s all any of us are thinking about right now, let’s once again turn to “Breaking Bad.” What was the moment in the pilot that sold that very challenging show to the network? It’s not hard to guess: The scene where Walt, now that he’s cooking meth, suddenly decides to stand up to the kids bullying his disabled son.

The point was clear: yes, this show is going to be about a self-destructive downward spiral, but along the way, our hero will feel empowered to do macho stuff that you’ll think is awesome, and if you come on this journey with us, we’ll give at least one thing to cheer for every week.

That moment was copied fairly shamelessly by the pilot for “The Americans”: the Soviet spy pretending to be a milquetoast American dad sees his tween daughter being hit on by an adult in the mall, then follows the guy home and delivers an old-school Bolshevik beatdown. The point was the same: Don’t worry, this guy’s horrible secret will occasionally have an upside. Set your DVR.
Posted by Matt Bird at 11:55 PM

Ha! I just finished rewatching the BREAKING BAD pilot a few minutes ago and was admiring (and had forgotten about) that exact moment. Defending Walt Jr. has a number of badass empowerment cousins: violently quitting his job, poisoning the drug dealers, and of course his first successful manipulation of Jesse -- convincing him to partner up.

Btw, I'm similarly meh about THE AMERICANS, which makes at least one lazy or craptastic choice for every good decision. And it's even worse because the showrunner was a real CIA officer and has previously written quite a good literary novel about what that's actually like. So when he starts having his characters killing everybody like it's going out of style and risking everything to do so -- especially FBI agents -- when he's also shown himself capable of creating real drama out of true procedural and historical details (like Reagan's near assassination or the fantasy of "Star Wars" missile defense or even the very accurate recruitment of the Soviet secretary), I just throw up my hands in exasperation.

I definitely liked "The Americans" more than you did. I thought it started off a little shaky but got better and better as it went along. As you cite, I loved how it made drama out of the mundane reality of asset-handling and how it worked the real history in. I also liked the levels of unabashed cold war pulpiness it could reach.

I'm wondering if this is one of the problems I had with TOP OF THE LAKE. It was bleak piled on top of bleak. I think there were other problems with the show, chief among them some heavy over-motivation, but I never saw that moment you talk about here, in the pilot or elsewhere. It was dark indie drama and overly plotty crime thriller haphazardly mashed together, beginning to end.

Yeah J.A., but you could be describing PRISONERS, too, which I know you liked. Is the difference that TOP OF THE LAKE was a mini-series? Which seems like a distinctly different animal from either a feature or a longer serialized drama with multiple seasons? Or are there things that the dual protagonists of PRISONERS get to do that make us like them more and want to follow them in spite of the bleakness?

I did like PRISONERS. And although they sound similar in my description, I think PRISONERS had a popular entertainment sensibility that TOP OF THE LAKE didn't. And I think that's one reason it sold for so much, even though it was so dark.

But I'm wondering whether the problem (one of the problems) I had with the mini-series is exactly what Matt is talking about here... that a series is really a different animal from a stand-alone film. That what we enjoy immersing ourselves in for two hours is different from what we enjoy for seven hours (or a hundred hours). TV, even the great TV that's happened in the last ten years, is something that needs to give us a little more reward/appeal than a dark indie feature. It needs to hook us. Give us some "fun" (whatever that may mean in the context of the show). And maybe that's one of the reasons everyone loved Omar so much in THE WIRE. The whole show was great, but when Omar showed up, you knew you were going to get to engage in some vicarious mad fearlessness.

TOP OF THE LAKE felt like an early Campion feature that was too long and had a crime element grafted on. I can handle SWEETIE for a couple hours, but I'm not gonna binge watch a show based on it.

Yes, I think that's a perfect illustration of what I'm talking about, J.A and j.s.

I watched the first three hours of "Top of the Lake" when they debuted on Sundance and I've been meaning to finish but I never have. It's really good, but it does indeed feel too much like a movie. I haven't seen Prisoners yet, but it certainly seems to fit my category of "bleak crime movies willing to limit themselves to a very grim-minded audience", and therefor can get away with a level of unremitting darkness that "Top of the Lake" cannot.

And you're totally right about Omar from "The Wire" too. There are points on that show where you're swallowed up by the grime and you find yourself thinking, "Just give me one Omar scene so I can make it through this!"

The comments about the bleakness of Top of the Lake are even more true of Broadchurch.

To Matt's point that an indy movie can be bleak for 90 minutes but a TV show has to have ongoing appeal: Broadchurch was 8 hours of artsy bleakness, with not one happy moment or appealing character.

[plus horrible coincidences and contrivances]
- Paul