How To Structure a Story Around a Large Problem, Step 7: The Hero Tries to Solve the Problem the Easy Way 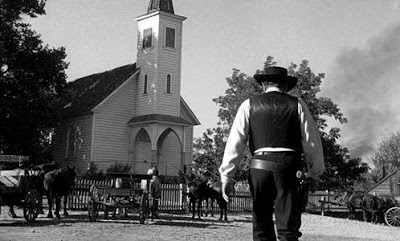 The Conventional Wisdom:
What Human Nature Dictates:
What Writers Should Keep in Mind:
Examples of Trying the Easy Way:
Notable Exceptions (But Don’t Try This At Home):
Next: The Midpoint Disaster...

The last time I saw HIGH NOON, just a few months ago, the film completely lost me at this point. I assume your still is of Cooper walking toward the church service where he'll ask all of the town's men to grab their guns and back him up? And they're all ready to, until suddenly they aren't. Why? Mostly because if they did what they seem most naturally inclined to do, then there would be no movie. I know Howard Hawks hated this film because he thought the sheriff never should have had the gall to ask regular civilians for help, that it was unmanly and unprofessional. But one could just as easily dislike it because the civilians opt not to help him for no good reason.

This is definitely the part of a script that traditional structural paradigms get wrong. They just gloss over it. There'll be 5 or more events that need to take place in the opening 30 pages, then little or nothing over the next 30.

The idea of a midpoint was a good development. But it doesn't go far enough. You can't go 30 pages without some sort of story development. I think 15 should be the max (I guess that's where the 8 sequence structure comes from). So there needs to be a revelation, irreversible change to the story world, change of allegiance, something. Otherwise you'll bore the audience.

And I totally agree that knowing the list of tasks ahead of time ruins the story. We should have a general idea where the overall story is heading, but only be able to see as far as the next obstacle. Then we round the corner, boom, more trouble. An example that comes to mind is Scott Pilgram. It didn't work for me because we know he has to battle the 7 ex's, so I found myself bored waiting for the 7th.

On a side note, will there be an article on the exceptions/anomalies that were highlighted in the chart? I have a couple of ideas on why some of them work but don't want to interrupt the flow of articles.

I'm trying to cover those as I go through each step under the heading of "Notable Exceptions (But Don't Try This At Home)", although, as with the rest of the chart, I won't be able to examine every one.