Straying From the Party Line: Unclear Goals and Imagery in In a Lonely Place 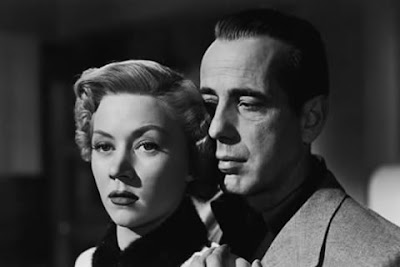 There seem to be two huge problems here…
But wait, here’s another problem:

Labels: Character, Concept, In a Lonely Place, Straying From the Party Line

The second problem you describe seems to have been a consistent problem/theme for Nick Ray, with the (gigantic) exception of Rebel Without a Cause, which has an overabundance of icons.

But I can't think of any particularly strong image to associate with They Drive By Night, Party Girl, or On Dangerous Ground. Even visually stunning movies like Bigger Than Life and Savage Innocents are perversely hard to differentiate from the crowd. The titles, too, are oddly un-evocative.

Which is all very strange, since I love Ray's movies so deeply. I wonder if there is any connection with his long-standing disagreements with his various studio bosses and producers.

Dorthy Hughes' 1963 novel THE EXPENDABLE MAN goes this story one better with its "is he or isn't he guilty?" question and the deliberately and ingeniously withheld bit of information that changes everything for the reader. Unfortunately, as per Matt's checklist, the novel never really recovers from the all too early reveal of its spectacular twist.

IN A LONELY PLACE does feel uniquely lacking in compelling imagery to me, but I wouldn't generalize to Ray's other works. There are strong images in REBEL, BITTER VICTORY, and BIGGER THAN LIFE to name a few. And his use of widescreen staging and color, especially in a film like JOHNNY GUITAR still seems original. Just a few of the reasons Godard declared that "Nicholas Ray is cinema."