Straying From the Party Line: The Multiple Heroes of The Shining 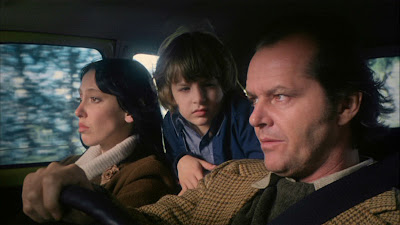 As I pointed out yesterday, this movie sort of shreds the checklist...
There are various types of the movie in which the hero is the bad guy: There are tragedies, like Citizen Kane or The Godfather, in which we watch and empathize with the rise and fall of an anti-hero. There are shock twist endings, like Fight Club or All the Boys Love Mandy Lane, where we only find out at the end. …And then there are movie like this one, where the hero becomes a flat-out villain and another character steps up to become the hero.  (I’m trying to think of others… maybe Chronicle?)

When I tried to apply the checklist to this movie, assuming that Jack was an anti-hero, I found that I was answering “no” to almost every question.  Not only does he fail, he basically never tries.  I soon realized that Danny was the true hero, but even that is problematic because he then becomes catatonic for so long.  Finally I realized that this is the ultimate tag-team movie, as the baton is handed off several times:
So does it all work in the end?  Yes.  This is a very unusual movie, but it pulls it off beautifully.  We identify with each hero (or anti-hero) when they’re in charge of the movie, then our allegiance and identification shifts effortlessly to the next hero.  None of them are complete enough to hold the whole movie, but between the four of them, we remain riveted.
Posted by Matt Bird at 8:00 PM

Labels: Character, Straying From the Party Line, Structure, the shining

The hero turns into the villain in the star wars prequels. - Not that they're very good writing example of anything.

Ensemble films like RESERVOIR DOGS and PULP FICTION hand off the role of protagonist relay-style from one story or POV to the next. Some of the characters stick around and become the antagonists in others' arcs.

Then there are the kind of Hitchcockian shifts of perspective whereby the protagonist of PSYCHO is killed suddenly and, depending on the way you look at it, Norman Bates becomes the new anti-heroic protagonist or Marion's sister and the detective fill in for her when they come searching for her whereabouts. You can see an excellent fresh take on this kind of abrupt and shocking narrative shift of a protagonist in Park Chan Wook's SYMPATHY FOR MR. VENGEANCE.

The way Matt describes the shifts in THE SHINING feels more like a novel (where we follow a different character each chapter) or even like an artier European chamber drama, the way that characters in Bergman's films hand off the lead -- in a kind of psychic and metaphysical power exchange -- especially obvious in films like SHAME and PERSONA.

I think Kubrick used this kind of approach repeatedly throughout his career. 2001 is a good example. But it's possible to argue that there's no single hero throughout the whole of FULL METAL JACKET, THE KILLING, DR. STRANGELOVE and even BARRY LYNDON, where the world of the supporting characters is often foregrounded at the expensive of the ostensible protagonist.

Yes, but I think movies like this and Psycho are different from standard multiple-protagonist movies like Pulp Fiction in that there's just one problem and each hero takes up the baton only when the other hero fails, so that, for the viewer, we have a very typical experience, only rooting for one person at a time, because at each moment there's only one person who can solve the one problem.

It's more like a relay race than a team sport. It could be that this happens all the time, but I'd never noticed it before.

PULP FICTION is an exception because there are clearly separate stories. But RESERVOIR DOGS is also a pretty good example of films with a central narrative or thematic problem where different characters take center stage and try and tackle it from their POV in alternating sequences. It's blatantly novelistic in this regard, starting off each chapter with a title card that bears the hero's name.