How to Structure a Story Around a Big Problem, Introduction 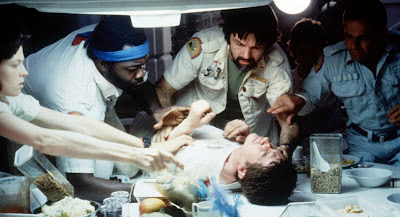 Okay folks, we’ve tried this before:
Now we’re back to make more sense of it all.  First of all, as you can see, I’ve changed the title.  For the purposes of the upcoming book, I’ve been expanding my definitions to apply to different storytelling media, but I also want to make it clear that there’s lots of stories that these steps don’t apply to, such as long-form TV or comic book serials, and also movies with atypical ambitions.

I don’t want to imply that beloved movies like Weekend or Slacker or Pulp Fiction are doing anything wrong simply because they’re not about the solving of a large problem.  This structure doesn’t describe some sort of “inherent nature of celluloid”, it merely describes the natural progress that most humans go through when we try to solve a large problem, which is why, if you’re writing that kind of story, in whatever media, you should probably hit most of these steps in roughly this order.

In this series, we’re going to walk through the steps of the most common structure, but that will actually start next week.  First we’re going to spend a week expanding my previous thoughts about specific genre structures.  Over the course of the Checklist Road Tests, it seemed that the concept of “the promise of the premise” was unclear, partially because I borrowed it from Blake Snyder.

It emerged that this could mean very different things depending on the genre.  In some genres, such as comedy and thrillers the audience and the hero are having fun together, but we also saw that in horror movies such as Alien, the audience is having fun because the heroes are suffering.  So this week we’ll tackle…
Let’s get to it!
Posted by Matt Bird at 5:46 PM

Labels: Genre Structures, How To Structure a Story Around a Large Problem, Structure

What, no Romance? So you won't be dissecting Nicholas Sparks or Gone With the Wind, or Pride and Prejudice? I can understand if that's not your interest. Just hoping for a guest blogger to fill in that genre!

Thanks for doing a genre breakdown. This is super useful!

Hmm, maybe I can cover that along with drama/tragedy...

Wonderful beat ! I would like to apprentice while you amend your site, how can i subscribe for a blog website? The account aided me a acceptable deal. I had been tiny bit acquainted of this your broadcast offered bright clear concept cool website designs